This is an extract from the log book of a cruise from the Ferry in August 1934 made by my father and his friend John. My father was one of the very early members of the club.

The boat that they completed their epic journey in  was a 16or18 foot ( there is no mention anywhere in the log of the actual size) clinker built, half deck sailing dinghy with a gunter rig. The name of the vessel was Seabird.

The only picture that I could find was a line drawing which is flying a Ferry burgee. 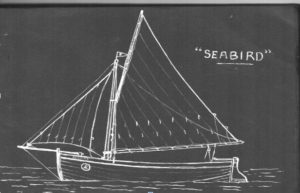 The first entry in the log is “The Ships Inventory”

6.30      Left Felixstowe ferry with all supplies on board

spent the rest of the night admiring the moon. We had moored in shallow

boat heeled over on the mud.

9.15     Reached the Ferry and carried on out of the river for Harwich as there was

10.30   Passed Cobbolds Point & were overhauled by a 14ft dinghy who however

found things a bit to hard &soon turned back.

11.30   Passed Felixstowe Pier-”Seabird” started putting her bow into the bigger

waves & we took a lot in solid over the fore-deck.

12.30  Reached Landguard point & landed under the lee of the breakwater for lunch.

4.00     Reached Ipswich Dock. Decided to run the engine back to Pinmill so we

dropped our hook & stowed the sails. The filler cap on the petrol tank refused

4.30     Left Ipswich for Pinmill after catching on the anchor what the first mate

9.00    Turned in for the night & hauled down the burgee at sun down-Wind dropped

2.45     Woke up a found the boat rocking like smoke & nearly rolling her gunnels

soaked to the skin.

Decided to run into Felixstowe Dock for shelter-Sea getting worse.

10.30  Taking water solid over the bows. Too rough to make Felixstowe Dock so

11.30  Anchored for a dry out opposite Pinmill & retired under the cover for a cup of

Doesn’t matter much as it’s raining hard & there’s plenty of food on board.

10.00  Arrived at Shotley & dropped the hook close to Shotley Pier.

steamer in the harbour had decided to move.

6.30   Weighted anchor & started the engine &plugged out of the Harbour against

Sea very choppy& everything soaked in a few minutes. Hoped to reach

Brightlingsea today but it doesn’t look as we shall.

7.00    Passed Dovercourt Jetty & stood out to sea for Walton-on-the-Naze. Sea

getting worse & wind just off aft of the port beam. Too late to turn back now.

7.30    Dare’nt hoist the mainsail too much wind so set jib as a storm trysail to stop

her rolling as much as possible.

8.00    Sea getting worse still but not breaking at all yet. Sighted a buoy right ahead

are about 2 miles out(rather a long way to swim!)

water,seas breaking all around us.

of the records have fallen out & broken.

of Island point for a dry out & a hot breakfast of eggs,bacon,fried bread &

to grab it before it sank.

Had first shave for 4 days & went to a theatre in the evening.

Easterly & blowing nearly gale force. The bloke in charge got rather annoyed

times nearly dismasted the dinghys;in fact we nearly got “ordered off the

Everything went wrong,it was pitch dark, the engine refused to go properly &

11.00     Hoisted sail & got under way-nice steady breeze-beat down Walton Channel

& explored part of Twiyyle Creek on the way.

1.00      Started back & dropped the hook for lunch opposite the entrance to Twiyyle

run aground near by. Tried to tow the yacht off stern first with the engine

running full out but could not move it. They tried putting their kedge anchor

out were stuck too hard.

3.10     Stuck on the mud ourselves but managed to get off by going overboard &

off to Walton in their dinghy.

4.00    Tried to get back to Walton but the tide was ebbing& the channel got narrower

until at last we stuck fast & could not go forwards or backwards. Good spot to

gramophone records which did not seem to be greatly appreciated.

row against the tide. Started up & promptly retired onto a mud bank again

winding about like a drunken snake & surrounded by mud flats covered

sight-water very phosphorescent & there is a trail of fire in our wake.

the awning up & got to bed.

10.00    Weather looks very bad &looks like a gale shortly so we decided to make a

dash for Felixstowe while the going is good.-Very strong wind so we decided

to run out under storm canvas i.e. two reefs in mainsail & only about 2 sq

feet of jib. We usually carry about 125 sq feet of sail & now we are reduced

to about 60sq feet- Said cheerio to the “Heron”.

knots most of the time.

12.45     Becalmed off Cobbolds Point- Set spinnaker to help thing along.

within 10feet of us again.(the first mate always gets annoyed if his feeding

2.30      Our friend “Water Gipsy” capsized after colliding with another boat this time;

her owner managed to jump onto the he hit fortunately. We were on the

hurry. Got a rope across to the capsized boat & managed to beach it by

warping it from boat to boat moored in the river.

Wind blowing half a gale at times, too rough to put out to sea, even the

river is quite choppy.

The dinghy was a dirty little devil,it threw gallons of water over its

weather bow 7 soaked us both in about 5 minutes- Great fun anyway.

Decided to pack up and go home.

As written by CHW,

How cursing has changed over the last 86 years with boats having modern technology, equipment and facility’s, Also in the log there is no indication as to what sort records they played. Was it classical,jazz or modern music of the time.

By Robert C A Wright