The 70s brought good years to our Club, membership was high and club racing very strong. And further afield the Club was beginning to make a name for itself on the national racing scene.

In 1970 the Club were winners of the RYA national team racing trophy, a project driven by the enthusiasm of Graham Henderson on behalf of the Club. In that event the team won all its preliminary heats, the area finals and then the final itself, held at Frensham Pond in Lark dinghies.

In that year our 505 sailors also won the Pitsford Aleyard team trophy, another prestigious event.

In 1972 the Ferry hosted the Firefly championship and FFSC boats finished 1st,,2nd and 3rd overall and a Ferry  helmsman also won the main race of the year, the Sir Ralph Gore trophy.

In 1973 Peter White and John Davies won the 505 World Championship in Hong Kong.

We were truly on the map in the dinghy racing world.

Graham Henderson was one of the chief movers and shakers in the Club at that time and was always looking for new adventures.

One of the events Graham targeted was the Southport 24-hour race. This was a race that had been held annually for a few years and had become a big event in the dinghy racing calendar. In 1972, Graham decided we should have a go at it. He asked me about it and I was not keen. It was raced in GP14s and Enterprises, neither of which did the Club have within its membership. I felt we would struggle in a borrowed boat that none of us had sailed before and on a lake we did not know. It seemed like a lot of graft for little reward…. a no-win, in my opinion.

This was no deterrent to resourceful Mr Henderson and he managed to borrow a GP14 from Leigh Dinghy Stores, the owner of which was a good friend of Eric Twiname.

I finally gave in and agreed to go, along with a group from the Ferry including Graham himself, Bill Goodacre, Eric Twiname, Pam and Peter White, Max Evans, Tricia Sudell, Nick Chapman and a few more whose names escape me.

The course comprised a circular route clockwise around the lake using the West Lancs Yacht Club buoys and rescue boats as turning marks. The Enterprise fleet started first and GP 14s were to follow 5 minutes later. Each fleet was sailing off a slightly different Portsmouth Yardstick number.

Our team manager, Graham decided I would do the first shift and I had Bob Wilson with me.

I made a lousy start, mainly because  the starting gun was fired early and we were nowhere near the line. I felt sure the race management  had made an error in their timing and it took me a few laps to calm down. We were well ensconced in the middle of the fleet, but the boat seemed decent and we soon got into overtake mode. After a couple of hours or so the fleets were intermingled and spread all the way around the lake. We didn’t know any of our competitors and had no idea of our position in the fleet. Although somewhat dispirited, we carried on and after a stint of about 4 hours, we were called in by Graham to make our first change. As we approached the pontoon, I could see that Eric Twiname was somewhat agitated, I thought he must be angry at our performance and was not relishing trying to get us into the reckoning. As we leapt out of the boat, imagine our surprise when Eric yelled “Well done boys, we are in the lead” .

Eric was a canny sailor and used to GP14s and I knew the team prospects were decent whilst he was out there. I cannot remember who was crewing him but as darkness approached, FFSC was still in the lead. Peter and Pam then took over and sailed well to maintain our position but Graham felt that Eric should take us through to beyond midnight. The only problem was that Bill Goodacre, who  was supposed to go with Eric, was in no fit state having been plied with pints all evening by the West Kirby gang. Coffee was forced down Bill and he was escorted into the front of the boat in a somewhat shabby state. However it said a lot for Bill that he soon pulled himself together to concentrate in what by then were very tricky conditions.

I took over again at about 2 in the morning and had Graham with me. We were still in the lead but there was almost no air movement and spinnakers were redundant. There then followed a most unfortunate incident which was to cost us dearly in the final reckoning. As we rounded one of the high-sided boat marks and tacked onto port a following boat came around the mark with a bit of momentum and caught us port and starboard. We had no idea he was there but had to take a half-lap penaltv.I felt sure he had gone head to wind to attack us, but in those conditions we were defenceless and the onus would have been on us. We carried on until dawn and then others in the team took over. As the day dawned the breeze picked up and other team members got into the act  and showed mettle by keeping us  near the front of the fleet. I am afraid I cannot remember much about that part of the race.

At the final gun at 1400 hrs on the Sunday, the time-corrected positions showed us to be second overall  a mere 6 seconds behind the winners, the hosts West Lancs.

We were mightily chuffed but frustrated to realise what might have been. And I have confess that I fretted about my error for a good few days after.

PS Apologies for any members who were there and I have omitted. 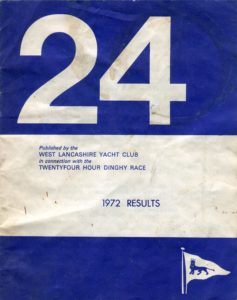 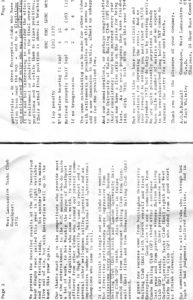 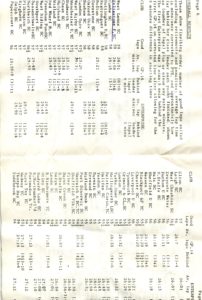