Pete Ballam and me had been racing in Squib 83 “Easy” for several seasons in the early 2000s. Pete is a very talented sailor and with him in the boat it was always entertaining and a guaranteed fun experience. We had attended a few national and area championships over the seasons and, in this particular year, we decided to do the East Coast Championship at Bridlington held under the burgee of the Royal Yorkshire Yacht Club. It was to be held over the Spring Bank Holiday weekend and the schedule necessitated travel to Yorkshire on the Friday beforehand.

We arranged to meet at ToysRus, Copdock Mill interchange mid morning on the Friday . I had a Toyota diesel van which was handy towing the Squib and duly met Pete at the appointed time prior to our journey up the A1.

As Pete unloaded his car with his sailing gear I noticed a large cardboard box sitting on the back seat. Without a word, Pete got this out, placed it in the van and I was amazed to see 4 baby jackdaws within, plus tins of cat food and a bowl of water.

“Well, I chatted with local chimney sweep and he was lamenting having to destroy jackdaw nests and their contents in the course of his work. I offered to take one off his hands at any time. This all happened yesterday so now is the time.”

Not one to be flummoxed easily I saw that the van was probably a safe place for these creatures to exist for the weekend and set off on the road.

Pete spent quite a lot of the journey stuffing cat food and water down these chicks and we arrived at our B and B with all intact.

Once settled in, Pete went down into the car park and dug a 3.5 ltr empty milk carton from a skip and filled it with hot water from our room. “It should keep them warm at night in the van” says Pete.

One of the chicks was older than the other 3 and had feathers and was better equipped to survive a night in the frozen north, but the other 3 had none and were obviously vulnerable. However, all 4 survived the night and after a good breakfast for sailors and jackdaws we went racing. We were steady on the water, but not great and ended the first day 3rd overall after 3 races. Pete rushed back to our digs as soon as we landed to feed his pets and then returned to the clubhouse for a few drinks and food.

We retired to bed quite late, but not before Pete did yet more bird feeding and refilled the hot water bottle.

Sunday dawned and another night was successfully endured by the chicks but there was a gale blowing and we were unable to launch and no racing ensued.

The prize giving was brought forward to midday once the boats had all been craned out .

The RYYC clubhouse is quite a grand building and we all assembled upstairs in the smart bar.

It was a super room and enhanced by a brand new carpet installed just before our event.

I suggested to Pete, for a bit of a laugh, that he should donate a jackdaw to the winning crew. Never one to shirk a bit of mischief, Pete waited in the wings whilst the prize giving took place.

At the end of the commodore’s speech when he thanked us all for travelling distances to make the event, and it was all about to be wrapped up, I called out for the attention of the assembled group and announced that the main prize had not yet been presented. Pete then stepped forward with the feathered jackdaw on his arm and offered it to Jenny Riley, crew in the winning boat. To say that Jenny was underwhelmed would not be inaccurate, but what happened next, I can say without exaggeration, brought the house down. As the bird was transferred across to Jenny’s arm it let go quite a large deposit on the said new carpet.

They all loved it, commodore, flag officers, dignitaries, squib sailors, all saw the hilarious side.

Pete took the bird back from Jenny and we set off home, the usual routine of feeding and watering ensued most of the way down the A1.

We arrived home in the early hours and I was sure the birds would be fine once ensconced in Pete’s kitchen and close to the Aga.

However, Pete phoned me next day to say that the 3 younger ones had not survived the night.

We concluded his kitchen was too warm for these little creatures that had survived the travails of cold Bridlington. Maybe the lack of feathers was the cause of their demise.

The other Jackdaw matured into an adult and spent many happy hours with Pete in Woodbridge. Alas, eventually, it also perished, having been hit by a bus.

I like happy endings but cannot offer one on this occasion. However, the Squib fleet talked of the Bridlington East Coast Jackdaw championship for many years thereafter. 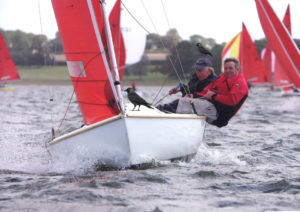