The Ferry had entered the Wilson Team Trophy in about 1973 or thereabout. This was an event for 3-boat
teams and held on the marine lake at West Kirby. The host club supplied all of the Fireflies and also
accommodation in members’ homes, which invariably was quite grand. I travelled up to the Wirrall from
London with Eric Twiname and we had a drink with our hosts before going to bed early with the prospect
of a couple of long days of intense racing ahead of us.

The marine lake is quite shallow and 3⁄4 centreplate was all that could be utilised. We didn’t really know
the extent of this and felt that the hosts had an advantage on us. Tacking the boats was an art to be learned
in such conditions. We had a decent team and arrived as fancied outsiders, rather than the favourites.

Tractor Wilson was crewing for me and we were comfortable as a unit, having sailed quite a bit together.
However, my stomach was troubling me and I skipped breakfast. I put it down to a bit of nerves as I knew
we would be under a bit of scrutiny from spectators lining the promenade. I also felt the responsibility
that comes from being part of a team.

As Bob and I climbed into our wetsuits I told Bob I was feeling a bit rough but asked him not to mention
it to the rest of the team. It was a cold blowy day and in the first race I sailed badly and the team lost.
When we reached the pontoon after the race. I told Bob I was going to the clubhouse to get something to
settle my stomach. As I stepped from the boat I found it difficult to straighten up and ended up staggering
along the prom towards the club using the railings as support. By the time I reached the clubhouse I was on
my knees, in great pain and extremely traumatised.

Luckily, a club member, who was a doctor, was in the clubhouse at the time. I remember being extremely
embarrassed as she unzipped my wetsuit and all that sweat and stench emerged.
She felt my stomach all over and immediately called for an ambulance.

I don’t remember the time scale of this part of my ordeal, but the journey to Clatterbridge Hospital seemed
to take ages. They put me in a waiting area and I was told someone would attend to me very soon. I lay on
the floor curled up. It was my favoured position. It seemed ages and no-one came. I think I must have
arrived in the lunch hour. My next move was to go and find someone. I crawled along a corridor heading
toward the sound of voices. A nurse came to me and asked me what was wrong. I could hardly speak.
They wheeled me into a ward and I was gone, probably unconscious.

I remember waking up, still in pain. The doctor told me they had removed my appendix and showed me
the offending item in a jar!

I had about 3 days in that ward, mostly unable to sleep because a youth in the bed next to me was crying
in pain most of the night. He also had his appendix removed.
Eventually I was allowed to leave and was kindly taken to their home by Ricky and Ginny Walters,
Firefly sailor friends of long standing.

I learned that my place in the team was taken by the journalist Bob Fisher and that he sailed very well.
However the team was not in the prizes on this occasion, but the national press got hold of the story and I
suppose the club received some dubious publicity.

I got a lift to Stamford, Lincs by some other West Kirby members who were returning their son to school
and brother John drove up from the Ferry to collect me.
I arrived at the Ferry with John on a nice sunny day and all seemed well with the world. 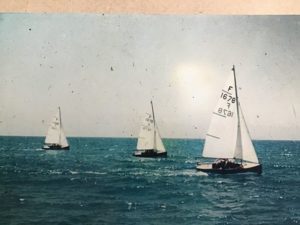 Photo contributed from Willy Braun (probably not Dave’s boat) but thought a Firefly photo would be good.