Oh no don’t stop the Carnival

Way back in 1967  the social committee  asked me if I could design and build a float for the Club to enter into the Felixstowe Carnival. Over the years I built a number of floats and here I have tried to remember what was what and where and when. I have trawled through various photographs and drawings to put them in to some sort of order  and any anecdotes that relate to each float.

In those days you could enter under the carnival theme or in the open class. The design of the floats was left up to me to come up with some sort of workable plan and to build them as cheap as possible!

1967– The design for this years entry would be a Viking Ship. I was able to scrounge enough hard board and plywood for the main ship hull. Paints and other materials were purloined from various sources around the ferry. The fugue head was a large yellow ducks head made of  papier mache on a chicken wire frame. This emblem was chosen as at that time there was an outbreak of quacking going round the club. Ninety percent of the work was done on the Saturday morning of the carnival by a willing team of helpers who were either good with wood,nails and painting. As the lorry only arrived on the morning it only gave us about six hours to complete the float. The boatyard was a hive of industry . The longship was christened “Deben Viking”. All those taking part in one form or another, some 30 members, were kitted out in Viking dress. Old sack cloth! and plastic helmets. The headline in the EADT says it all. 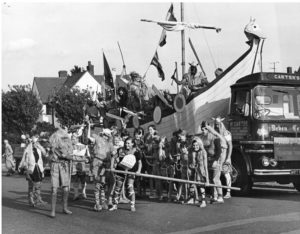 1968– The theme for this year was a North American Indian entry which consisted of a tribal village on the lorry with totem poles wig-wam and other native style bits and pieces . The main part of the entry was a 24 ft war canoe carried by six persons dressed up as Indians. This was built in the dinghy shed as the weather that week was some what inclement.! About half way round the procession route it started to get quite heavy and had to make a pit stop. There were about 20 other people accompanying the floats also decked out in various Indian type attire. In front of the carriers was an old shoe bag converted to carry large light ales! 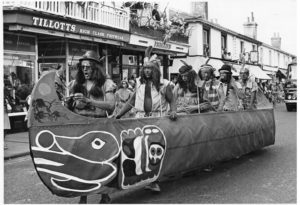 1969– entry was the “Charge of the Light Brigade”. In order to achieve this I got Tolly Cobbold  publicity/advertising dept to make a very large facsimile of their “Large Light” bottle. This was mounted on a chassis of a old Suffolk farm wagon dating from around 1920. It is amazing what you can scrounge when push comes to shove. The bottle was called “Big Burper” and was towed by members wearing cut outs of light ale bottle on their backs. They were know as “The Ferry Light Buoys.”Approx 30 members helped and took part. 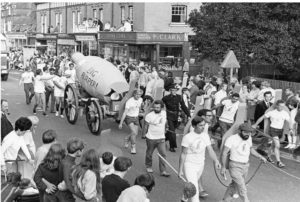 1970–The theme for this year was “Into the 70’s.” The Ferry entry was title Into to the 70’s for a whale of a time. It consisted of a whaling ship called “whale oil beef hooked” and a large 24ft model of a whale on a flat bed trailer which was pulled along the procession route by a team of 16 club members. The whale was constructed of a “Dexion” frame(a large sort of industrial meccano) and chicken wire and covered with cloth donated by Philips and Piper of Ipswich makers of posh riding jackets. The whales eyes were two old car headlights which flashed on and off,both its tail and jaw moved up and down and squirted water out through its blow hole. All this was operated by ropes,pulleys and garden sprayed from the inside. This was done by Piggy and Debbie. The whaling ship was made of the usual plywood and hardboard. All the other bits were found in and around the ferry. As usual all this was build in the boatyard over approx one week. About 30 members took part. On the way round we had to make a stop at the old triangle toilets as some of the youngest needed to pay a visit. This was all well and good but for the problem with those dressed as mermaids with fish tails. They had to be lifted off and taken to the toilet. For our efforts this year we were award first place and BEST OVER ALL. 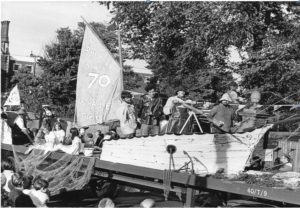 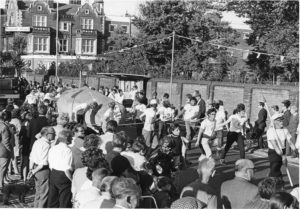 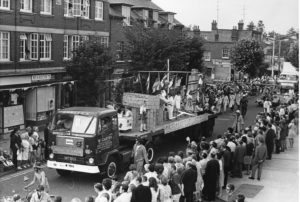 1971– This was the year that the UK joined the Common Market. The Ferry answer to this was “Up and Away with FA (Ferry Airways) into Europe. On the back of the lorry were five iconic European buildings ,Leaning Tower of Pisa,Brandenburg Gate , Dutch Windmill, Eiffel Tower ,Belgium plutonium and flag of the common market. Participants were dressed in National costumes of the various countries. The second half of the entry was a replica of a Sopwith Camel Biplane made from Dexion, plywood and cover with cloth which came from Philips and Piper and mounted on a flat bed trailer. The propeller was made by Stan Sawyer and it was aerodynamically correct and was turned by an old windscreen motor. I still have it hung up in my garage. All the construction and fabrication took about six days work to get it ready for the Saturday parade. As the plane was over eighteen feet wide it had to have a police escort from the ferry! About 35 people participated. The entry won first in its class and BEST OVER ALL. 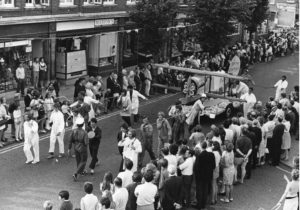 1972–The main theme for this years was”Naval Victories”.In order to enter this class the clubs floats was “The surrender of the German U-Boats at Harwich”. A bit of local history would seemed to have been fine. But oh no! No one had told us that the judges for this year were the German Mayor and Prince from Wesel. Whoops!!!! No prize this time. On the lorry was a destroyer”HMS Felixstowe” “D42” made from old motor cycle packing crates from an outlet in Southend. A good scrounge for free. Following behind on the good old flat bed trailer was a German submarine “U2”

“Guzzunder” flying a German Imperial Navy flag. The sub was taken over on the sea front and a large White Ensign was attached to the periscope. By the time the procession had finished over 35 members had followed the float. It was also hi jacked by Max Evans and Nick Chapman who had been to a wedding that day. 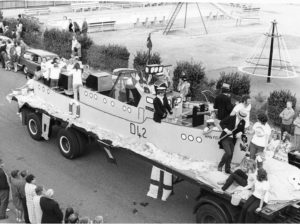 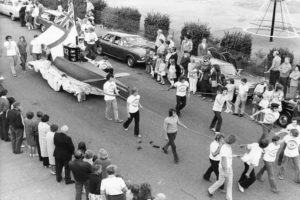 For a float again based on Cowboys and Indian I carved two totem poles out of an old telegraph pole. One was a hooded snake entwined around a central axis and the other a more traditional totem consisting  of three elements. At the base was a bear, in the centre a dolphin and topped by an owl. These represented Earthn Water and Air. Both these totems are still in existence and can be seen attached to the scout hut in Kirton.

After each carnival the float was dismantled and various materials were saved to be use on next years entry. Most of the materials used to build the floats was either scrounged, begged. borrowed,or other wise purloined to keep the cost to a minimum. Most of the work beforehand was carried out by myself  the week leading up to carnival day  and was done in the Ferry Boat Yard. Some of the construction was prefabricated elsewhere and taken to the ferry to be finished off by an army of willing helpers. I found that it was most satisfying to see a plan come together and work.

1979–The theme was “The Year of the Child” or “Ferry Airways Unites the Children of the World”. This was the last major float that I designed and constructed. It consisted of two parts. The first sector was a model of Concorde towed by a small tractor. The second sector was a large world, year of the Child motif and other display units. This was the first time a low loader trailer had even been seen at the parade. A Ferry First. In order to achieve making this ambitious float I kept a record of the time it took to build and materials used.

To begin with the whole entry had to be designed. The Concord which was  called “Concordant 174” and named “Kehaar” after the seagull from Watership Down. Big white bird.

The world, floral frame weather vane and sketching out the lettering and how it would be put together took about 9 hours.

The building of the world which was 5ft round on a frame of chicken wire and wood frame held together wire galvanised wire. The amount of wood was 18 ft of 2×2 ,113 square ft of chicken wire and cover with buckets of papier mache from old EADT papers. This was made in my garage at Swallow close and transport to ferry completely painted. Total hours 28.

The frame for the motif was made of 28 ft of 1×1 and 16 square feet of chicken wire was covered with crape paper flowers in black blue and yellow some 1000 in total. It is surprising how long it takes to make paper flower and then attach them to the frame. This and the remaining bit and pieces including cutting out all the lettering and servicing the tractor totalled 95 hours.

The dimensions of Kehaar were 21ft 6 ins long , 9ft 6ins wide and stood 4ft 3ins high at the tallest point. There was an amazing amount of materials to build it.

120ft of 2×2,  60ft of 1×1,  150 square ft of hardboard ,6 ft 2×2 oak ,18 square ft of block board ,5 kilos of various size nails ,bolts, screws ,studding, tape and gallons of paint. All this building was done in my back garden. In order to get it out and to the ferry I had to take down part of the back fence  to put on a trailer for transport with the other bits. The reason that the Concordant “Kehaar”174 was so called as it took me 174 hours to build. The total floats was finally put together by an army of helpers who in turn took part dressed in various national costumes (18 different countries) , air crew (pilot, and hostesses) and ground crew.  Over 45 people took part.

Unfortunately the judges that year thought that the Ferry entry were two individual entries and only awarded a Third prize. If only they had asked!!!!!

After the carnival it was broken up. Kehaar sat in my front garden for some weeks. Unfortunately during that time the weather  was somewhat wet. The rain filled the wings and fuselage with about 5 gallons of water. It was eventually broken in to manageable pieces and ceremonially set on fire. It took about 6 to 7 hours to reduce it to a pile of ash!

The total time spent from concept, design building to destruction was approx 313 hours! 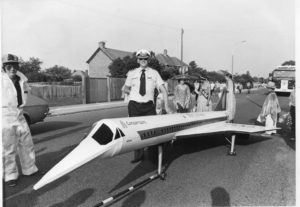 But very satisfying and fun.

Do you recognise any one or even yourself  in a much younger version!

(aka Robert C A Wright)