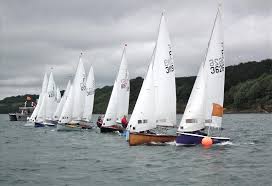 We were asked to hold these nationals in 1966.  At the time I was running the bar and knowing that Firefly sailors could down an awful lot of booze from previous Nationals around the country, I made out an order to be delivered on the Thursday before that week.  I tripled my usual weekly order with Adnams , including two barrels with stands which were accordingly delivered on the preceding Thursday.  We set it all up in the then pigpen, thinking we were adequately supplied for the coming week.  Come Tuesday there was hardly any, worth speaking about, left!

I rang Adnams in desperation and asked for an immediate delivery.  I was told they couldn’t possibly do a delivery till the Thursday In spite of the rep having assured me we could always ring for an extra delivery.  I pushed and they went away to request an earlier delivery but the answer was again no.  So here we were with a few hundred thirsty sailors about to descend on us and no beer!    I then said to the young girl on the phone let me at least tell you what I require.   I then doubled the amounts I had already written down and again stated I wanted it straight away.  She went away again and on her return, hey presto! it was ok.  That’s  fine Mr Billing, it will be with you by 11 o’clock this morning.

It all arrived as promised.  I had never seen so much beer in the Club and it was nearly all gone by the end of that week.  Needless to say this was before breathalyser tests!

I was  telling this story a few years back in the Clubhouse and all of a sudden somebody said I’ve heard this story from the other end.  It turned out Adnams had to break into a Directors’ meeting to get the delivery authorised.