Popular News
Racing Report
Early Spring Series Race 4
What a finish!!
The final race, the forecast was for 9 -10knots. The fleet mustered, the RO set a course, the fleet mumbled about wind…”are you going to abandon?”
“Ferryman don’t abandon, We’ll set a course if you don’t want to sail then you’ll miss out!”
And so it was set, a short course of:
Perkins (port)
Kingsfleet (Port)
Oystercatcher (starboard)
Line
By the time the first boat had launched nearly half the fleet had decided that the wind would fail them, “will this wind, be so mighty as to smite?”
“no”
So they packed their boats up and watched as the sun shone and the wind filled in, it did mean that the classic start line hole was significant, the last of the flood tide and no wind on the line meant the timing for the gun would be critical.
In class 1 again Roger Lewis & Isaac Foot won the line and also took the champagne start for the series (no awards will be presented for this; it’s just a turn of phrase), nailing the line at the gun and hoisting the kite. They were very closely followed by the two remaining lasers Stephen Carr leading series leader Mike Hill over the line.
With their Kite set and the first puff as they cleared the start line hole, Lewis / Foot pulled away and it seemed like a done deal, but as the course tighten through the moorings they had to drop the kite, allowing the lasers to gain some ground back.
A glorious sail followed, the wind built a little allowing the lasers to get on the plane.
Lewis / Foot sailed a ‘straight’ line after being forced to drop the kite, but that small change in wind direction allowed the lasers in.
Mike Hill snuck past Stephen Carr in another close finish and he took the handicap win and the series win. Well done Mike (legendary status, winning a series as a newcomer!)
Multihulls:
with the fleet decimated by what they thought would happen rather than the same belief in the Race Office or even the bad day on the water is better than a good day in the office, just the two lead boats in the series took to the water for the final race.
The good news was it meant that rather than time on distance the two boats Rowell / Mustill and Johnson / Johnson decide that they would have a little pre start match race. The start gun went but the two were locked in a battle a long way back. Eventually Rowell Mustill led back Johnson / Johnson by a healthy distance. Job done, relax, sail a straight line as ‘The Coach’ says.
If only sailing was that easy, as they approached the ferry jetty, Johnson / Johnson had gained; were gaining still, a boat length, side by side.
As the line came close Rowell / Mustill bore off for the line and Johnson / Johnson got a puff and luffed up for the favoured end. Gun! Gun! Johnson / Johnson hit the line less than a second before Rowell / Mustill. An fantastic finish to what was an amazing evening sail.
Well done to Early Spring series winners, Mike Hill (laser , Class1) and Rowell / Mustill (Dart 18, Multihull)
Full results are here: https://ffsc.co.uk/racing/early-spring-series/
Club boats are now available for hire please email sailing@ffsc.co.uk
Also there is a sailors whatsapp group for updates, crews, hirings, cruising, email sailing@ffsc.co.uk to get added 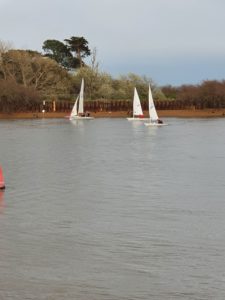 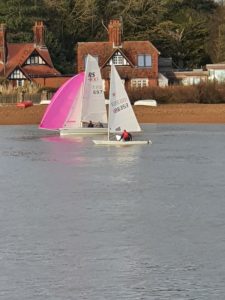