The weekend of the 23/24th of June saw a brand new open meeting hit the calendars of many catamaran classes. The Felixstowe Ferry Cat Open was to be the first in the clubs history which has come into existence to cater for the enthusiasm from the youth club members who have rented the clubs Dart 16s, several of whom have moved onto buying their own Dart 18s. Windsport and Summit Watersports sponsored the event which meant there were some great prizes up for grabs including £200 worth of Windsport vouchers!

For those who have sailed at FFSC the memory of the sailing environment has to be the strong tides and the challenge of crossing the shingle bar when heading out to sea to the race area. This weekend was no different and Saturdays start time was after lunch to take advantage of an ebbing tide.

Saturday started with entrants being meeted and greeted on arrival to the car park and shown where they could setup their boat. A flurry of boats arrived throughout the weekend with boats having traveled from Brightlingsea, Weston, Grafham and the Blackwater on the day. F18s, Nacra 15s and Hobie Dragoons. The dinghy park had them all. 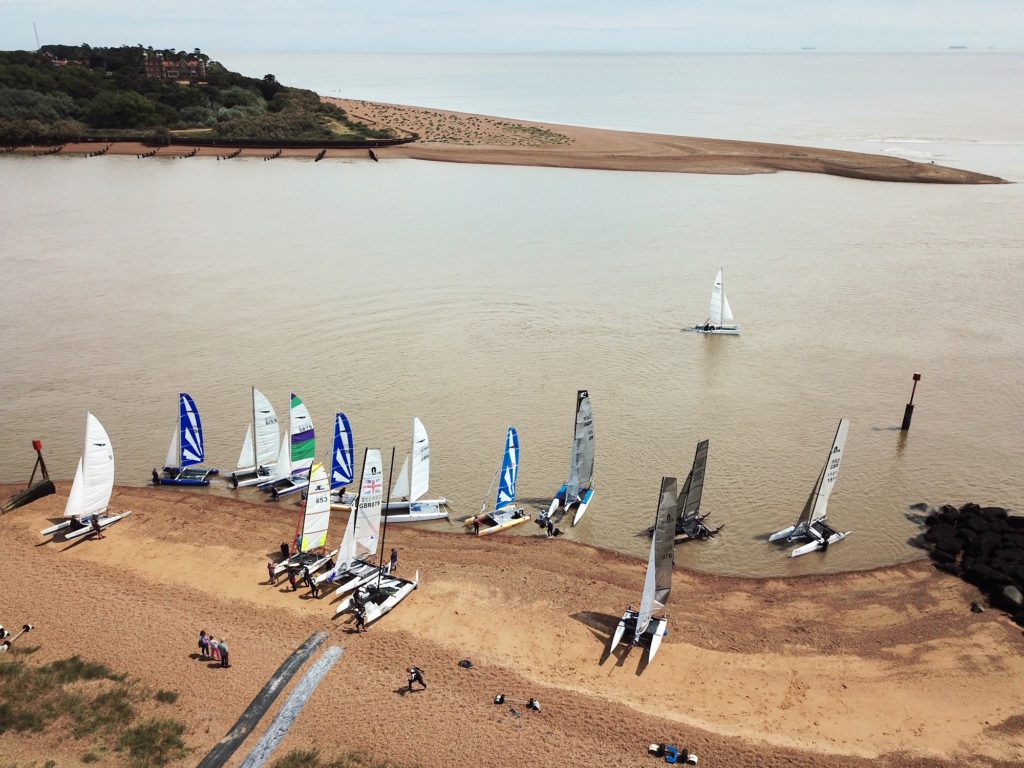 Launching after lunch meant it only took 20 minutes to get to the race area. Fantastic sunshine with light winds. Race 1 got underway with a great start from Sam Rowell and Josh Seddon who held 1st place for the first two laps before letting Grant Piggott and Simon Farran through at the leeward gate. Time and distance on a line with tide was key.

After race 1 the wind dropped dramatically and the fleet was drifting. A sea breeze came in at 180 degrees which meant the entire course had to be relaid. The start of race two was again time and distance. The wind continued to bend throughout the race making a biased course and even more biased gate. The tide made it even more difficult to get from the leeward gate to the finish line which was exceptionally for Abbie Walker and Marnie Aers  (fresh back from the RS Feva Nationals) in their Hobie Dragoon Extreme.  Nick Barnes and Nigel Edmonds took 2nd with Megan Smith and David Nickalls taking 3rd with Shaun Allen and Elias Woodard in the fantastic Shearwater making an appearance at the top of the results in 4th. 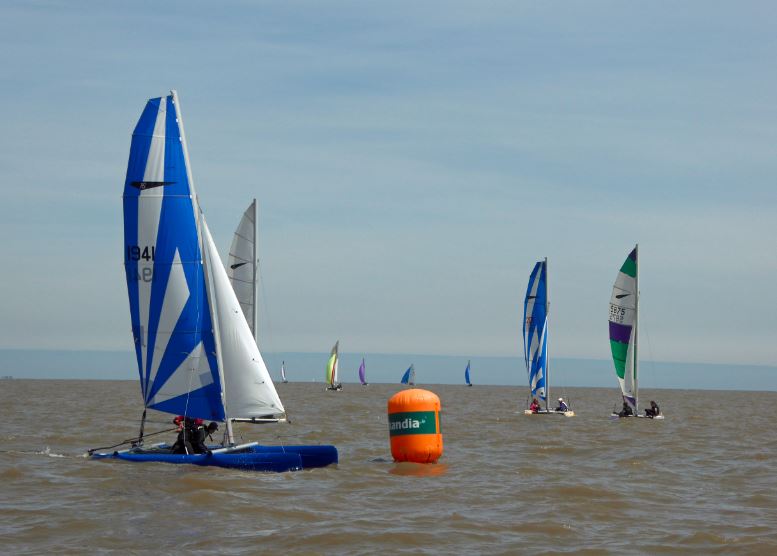 Before Race 3 the wind simply couldnt make up its mind. A few boats returned to the shore right before some fresh breeze came in at 90 degrees. This caught Daniel Smith and Harley Barkes unaware who capsized but managed to recover. This force 4 remained solid for Race 3 which was one of the best of the event. Those who went in definitely missed out. Bearaways round the windward mark required someone out on the trapeze and there was even a little capsize from Ghislain and James in the F18 when passing through the leeward gate.

Saturday evening had a meal for all competitors and a disco. Enjoyed by all especially those who frequented the bar. Some fireworks even appeared at midnight. Those who werent ready to bed walked up the river to the ski jetty to witness the best phosphorescence seen in recent years. 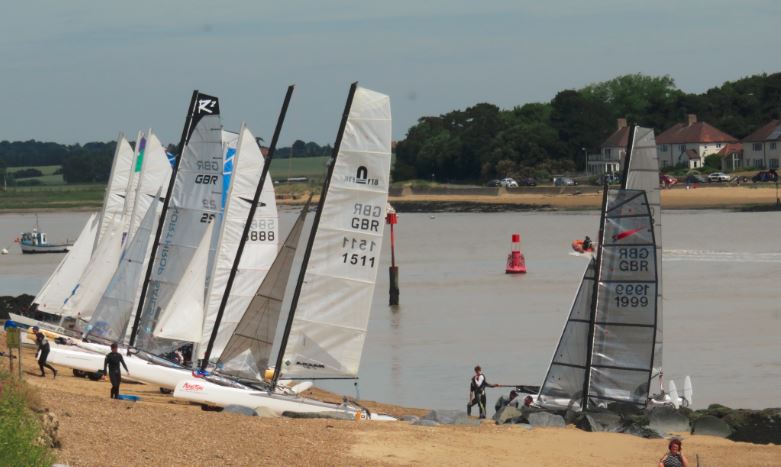 Sunday morning came round. All boats lined up on the sea wall ready to go. All three races were sailed into a consistent onshore force 2/3 breeze which was surprising as it was expected this day would be spent waiting for wind on the beach. Breeze was steady and three races went ahead almost back to back. Sam Walker and Finn Hurden managed to bring their A game and performed a lot better in their Dart 18 than the previous day which ultimately made them first Dart 18 overall. 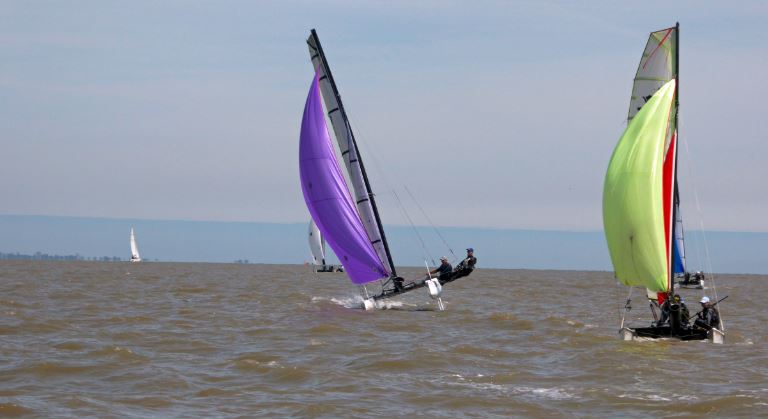 In Race 2 Grant Piggot and Simon Farren ended up over the line and once penalty applied ended up coming 15th. An unfortunate break in an otherwise solid collection of bullets. Following race 2 Morgan Mitchell and Elsa Smuts returned to the shore as hay-fever which started the night before had left helm Morgan unable to see. This unfortunate event meant that they would later receive the perseverance award. 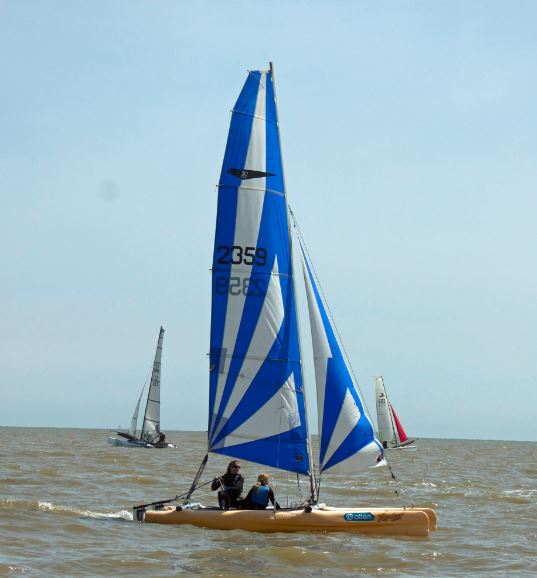 Race 3 the breeze started to drop however Jennifer Allen and Kate Bowden-Smith managed to place 8th overall. A quick return to shore and pack down before BBQ included in the entry fee. Just what you need after a day afloat.

The prize giving took place and although we raced as one fleet the results were split between fast and slow fleets with additional prizes for Dart 16 Nationals, UKCRA Junior Championships. FFSC Provided the glassware and Summit Watersports provided Nacra visors. A big thanks to our main sponsor, Windsport International who provided six sets of battens and 4x £50 Windsport vouchers. Prizes well worth winning! Results and prizes awarded below. 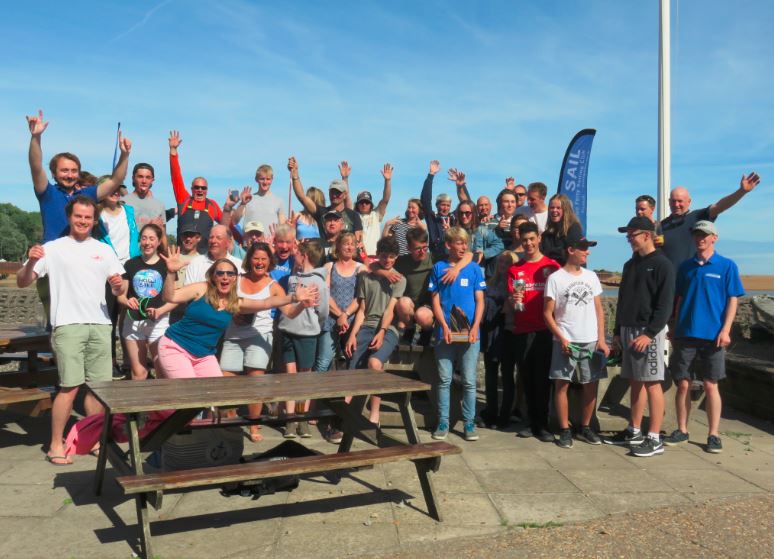 A massive thanks to all those who helped out and those who attended and made the event as enjoyable as it was. A special mention to the ladies behind the registration desk, Patrick the chef, Colin behind the bar, safety boat crews and of course Tim O’Leary who had to deal with challenging tides and shifts when laying the best courses for us.

A date for next year will be announced in the next few weeks. 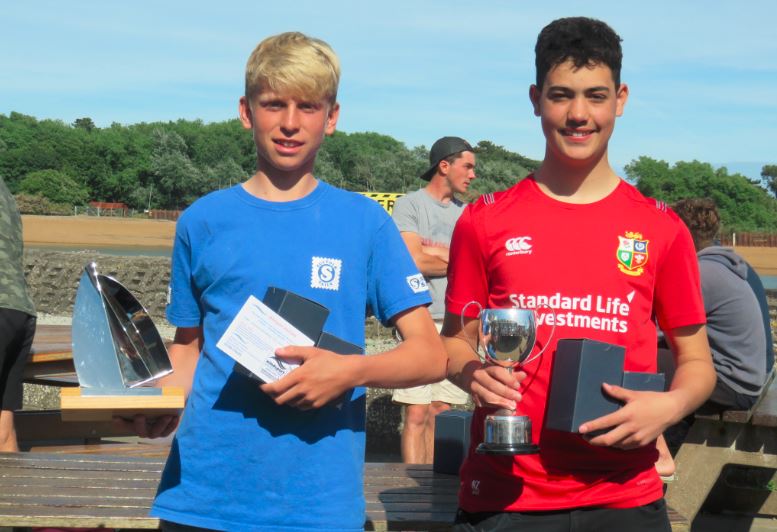