The long distance race took place on the 26th of August. Previously moved from earlier in the year there were once again some high winds. Not to be deterred the course was changed to be up the river to Methersgate Quay rather than to race out to Orford Haven and Cobbold Point as previously planned.

Andy Robinson planned the course and three safety boats were afloat to help the 5 boats racing the 20 mile course. The start was downwind and with the tide with a broad reach down to Green Point. Andy Robinson had the best start off th 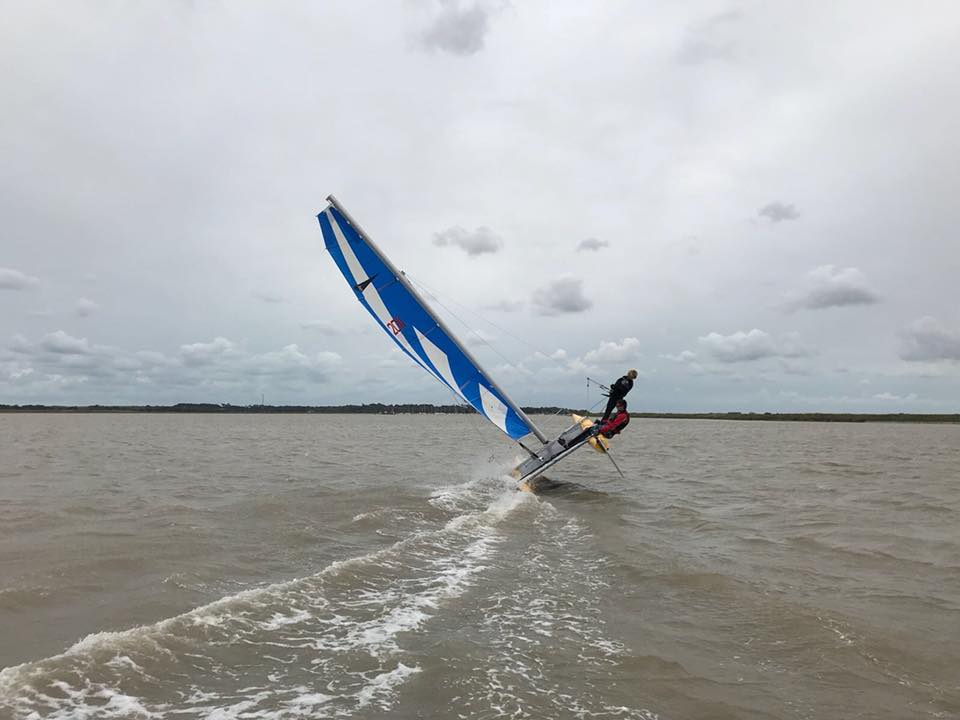 e line in his Dart 18 followed by Sam Rowell and Ed Swain in the Nacra F18. Sam Walker in a Dart 16, Zac Monk in a Dart 18 and Jack Lennard in a Dart 16 followed. A few gybes past Ramsholt and a few cautious spinnaker hoists on the F18.

The fleet flew past Waldringfield with the Safety boats struggling to keep up due to the speed limit. A super fast reach whilst trying to find the Methersgate Quay mark for the starboard rounding and turn around point of the course. Funnily enough its a big yellow mark with Methersgate written on it.

The fleet rounded within minutes of each other to then be faced with an extremely exciting upwind leg. Hulls flying, trapezing and twin trapezing the boats flew back past Ramsholt. A very exciting event then occurred. Sam and Ed left their tack too late and hit the mud in the F18. With boat boards down they locked in place sending the boat into a pitchpole in it remained as the wind pushed the rig over the front of the boat. With the boards stuck the pair had to capsize the boat before pulling the boards out, pulling the rig upwind, righting the boat and relaunching. Safety boat on hand just in case things didnt go to plan.

It was a big reach down to the club line with a few tacks through the moorings thrown in. Boats flew up to the line but had to complete a massive bear away in order to return to the shore. Five boats left and five boats returned having had a great few hours sailing.