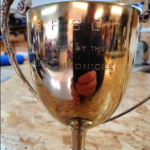 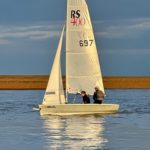 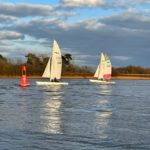 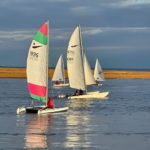 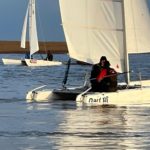 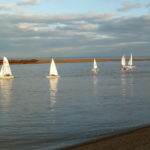 The opening salvo of the Felixstowe Ferry Sailing Club dinghy racing for 2021 got underway with the traditional all in start for the News Chronicle trophy. This trophy was first presented to the club in 1959.

A glorious evening sun spread a little warmth as the 10 – 14 knot northerly did it’s best to chill the sailors. The race office set an upriver course just three legs, a long upwind with a passing mark and then a long run home to the club line.
At the start there was a degree of consideration from the fleet with the tide pushing them on, Sam Rowel led the fleet away in his Dart 18, Roger Lewis and Isaac Foot in their RS400 in pursuit, closely followed by Mike Hill in a Laser 1 and Paddy Moriarty in a laser Radial.

With a better line through the moorings and a better upwind angle Lewis / Foot got in front of Rowel and held them off until the passing mark, Sam Walker and Katlyn Lucas and the other Dart 18 of Ian & Paul Johnson had caught up the leaders and were battling for the lead .

A good hoist and better angle against the tide saw Lewis / Foot take the lead from the Darts and they held on to take line and handicap honours. Second on the water was Walker / Lucas followed by a gaggle of Multihulls, then the lasers.

Full results are here: http://www.ffsc.co.uk/sailing/results
Thank you to all those that turned out to race tonight and everyone that helped make it happen. Especially the safety boat teams who had a very cold night watching the boats home safely!
Share. Twitter Facebook Google+ Pinterest LinkedIn Tumblr Email