Popular News
The saying one swallow doesn’t make a summer, so it is with the grand masters in the lasers. The arrival of warmer air brought out all the grandmasters and masters in the laser fleet.
The youngest RO of Tilly Jones ably assisted by Chris Jones (if Tilly can, you can) set a course of:
QUAY ST
KINGSFLEET ST
OYSTERCATCHER ST
2 LAPS
LINE
Monohull start saw a large gaggle of lasers crowd in under the club with the RS400 of Lewis / Foot and the Merlin Rocket of Scammell / Read making an appreance in the meddle. Grandmaster Max Evans had the gun and led the fleet away past the fuel jetty. The spinnaker boats freed themselves of the lasers and set of in pursuit of Evans who with clear air and square running out of the tide was making some good gains on the fleet. Scammell / Read found out that rebuilding boats in the dark can lead to lots of string in the wrong place and found themselves playing catch up. Lewis / Foot found themselves in the unusual position of having to chase down the lasers. John Daniels was showing his usual pace in the laser as was the younger master of Matt Ambrose (not sure you make the Master category Matt?). As the fleet closed in on Kingsfleet Scammell / Read had found the right bits of string to pull and were gaining on Evans, Lewis / Foot and Chris Coe who had gybed his RS100 into the lead bunch.
Scammell / Read had inside overlap at the mark on Evans, Lewis / Foot forced to go wide and Coe finding his hands full with a gybe drop lost ground. A tidy rounding and the ability to point right at the mark allowed Scammell / Read to pull away, the Lasers and the RS400 forced to put in extra tacks to make Oystercatcher.
The beat to Quay saw the fleet head back to the Felixstowe side, this led to some significant lead changes as first Scammell / Read found the ‘putty’ and then a mooring buoy to have a little pause and consideration of improvements to beat systems and navigation. Then Lewis / Foot not hearing Scammell’s warning of “it’s very shallow there!” they too found the putty, this allowed grandmaster Evans back into the lead a lead he held until the final layline into Quay.
Lewis / Foot led Max Evans then John Daniels closely followed by Matt Ambrose, the advantage of the lasers square running meant the gybing RS400 couldn’t make the gains, the Merlin Rocket of Scammell / Read were beginning to catch up fast (again). This leg saw Chris Coe test the waters temperature of teh Deben, still a little parky!
At Kingsfleet for the second time Max Evans showing the way, Lewis / Foot, then in close company John Daniels, Scammell / Read, Matt Ambrose. Again, the upwind performance of the Merlin Rocket allowed them to overtake Daniels, Ambrose and Lewis / Foot.
The beat back saw the double handers struggle to get past Evans with the extra draught, finally catching him as they approached the boatyard. At this point there was some calculation for the final tack; or was it the final tack?
A serious error of navigation meant that Lewis / Foot, Evans and Scammell / Read all made for Quay, however wily Master Daniels and Ambrose read the course properly and whilst the 3 boats sat in a hole trying to round Quay (for no reason) they tacked for the club house line and took the first two positions. I can’t tell you who came next as your correspondent was too busy trying to round Quay!
Well done to the Grandmaster Max Evans, summer must be here!
There is no multihull report this week as your correspondent was in the mono fleet (feel free to send me a multi report next time out).
Please can we ask that everyone enters, (preferably online) but shouting up to the crow’s nest is fine. This does two things; first it makes the Race Officers job a little easier and secondly it also covers the club for Covid regulations for organised sport, thanks in advance, the sailing committee
Full results are here: https://ffsc.co.uk/racing/early-spring-series/ 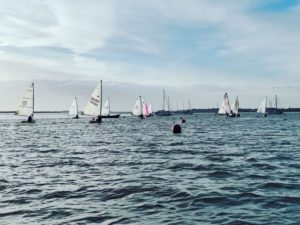 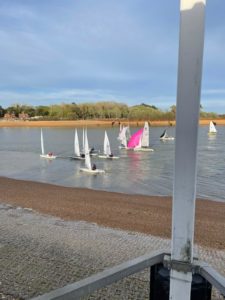