Early afternoon as the tide just began to flood the well-laden Siblings Too and Splash set sail from the Ferry with Bev, Doug, Nick, Suz and Paul Smith aboard. The passage past Felixstowe was a bit lumpier than expected but the shipping channel was safely crossed and we landed at Stone Point at about 4:00 for a short break. 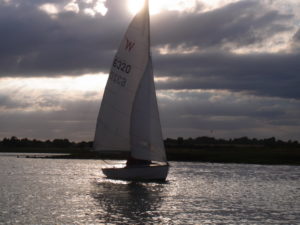 Then, in an apparently dying breeze, we set sail along Hamford Water to Landermere Quay. The gentle breeze continued until halfway back along Hamford Water when a NE 5, gusting 6, set in as we recrossed the entrance to the Walton backwaters to land again on Stone Point- that made for some exciting sailing in the well-laden boats!

Once safely ashore, at HW, we had to quickly pitch tents and cook dinners in the fading light. Bev and Doug slept on Siblings with an over-the-boom tent and the others pitched on the beach. The late tides meant a we could have a leisurely breakfast before packing up. We sailed first past Titchmarsh Marina and over The Wade before the light winds and falling tide meant discretion overcame valour and we retreated and headed for home – we did not have enough food to risk being stuck for 12 hours and then maybe for the night!

The breeze continued to drop so Splash began to motor to cross the Shipping Channel and off Cobbold’s Point picked up Siblings in tow (saving Doug a long row!)

A good weekend despite the wind varying from a whisper to Force 6.