Popular News
Racing Report
Early Spring Series Race 3
The forecast NNE 20 – 30kts seemed to have dissuaded some of the FFSC legends from turning out on a cold blustery evening, those that did were rewarded with a upriver course at near low water.
The RO set a course for the Mono’s of:
Oystercatcher P
Kingsfleet S
Greenpoint S
line
With the Multi’s doing an extra ‘loop’ between Kingsfleet and greenpoint.
With the club line in a small wind hole and the last of the ebb holding the fleet back, again it was Lewis / Foot with the sharpest start closely followed by Mike Hill (series leader) and Stephen Carr in the lasers, Laser Class Captain Richard making the standard Ferry error of misjudging the run to the line against the ebb, leaving himself a good gap to the front runners.
With some strong puffs and a one sided beat Lewis / Foot in the RS had one of the rare Ferry races when they couldn’t set their spinnaker, so couldn’t take advantage of the extra horsepower, first to finish it left the lead lasers of Hill and Carr having a ding dong battle all the way round. Sneaking up the Felixstowe side of Horse sands, Mike Hill edged it from Stephen Carr by just two seconds. Not bad after 40mins of hard racing!
In the multi’s the fleet was reduced by the upper wind limit restricting the club hire fleet to shore, this left the Dart 18’s. At the gun Johnson & Johnson (Jr?) had the start as Rowell / Mustill had a poor tack at the gun and the tide gave them a hard time getting to the breeze line. Johnson / Johnson had to tack to make the boatyard jetty and they to had a slow tack and this let Rowell / Mustill through. as they cleared the wind shadow of Bawdsey they lit the after burners. At Kingsfleet Rowell / Mustill had a narrow lead from Johnson / Johnson but there was no way through. A navigation error by Johnson senior (it must have been you Ian?) saw them fail to do the proper course, which although first over the line lead to a RTD and an easy win to Rowell / Mustill.
Another great sail, with just one race to go in the series, it looks like Mike Hill in the Lasers and Rowell / Mustill in the Dart 18 have the series in the bag…The temperature is rising, the wind is blowing, better a bad day on the water than a good day in the office!
Full results are here: https://ffsc.co.uk/racing/early-spring-series/
Club boats are now available for hire for racing and for cruise in company, please email sailing@ffsc.co.uk
Also there is a sailors whatsapp group for updates, crews, hirings, cruising, email sailing@ffsc.co.uk to get added
Cruise in Company
The first of the season saw 5 darts, 1 laser and a tideway out today sailing in company, enjoying the fine weather and good breeze, if you would like to hire a club boat for the next weekend we have planned, please email sailing@ffsc.co.uk 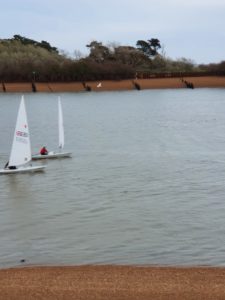 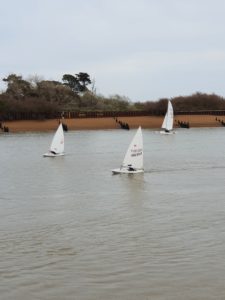