Talked about new double glazed windows and that congratulated David and Kate White on the safe arrival of their new baby boy!

Josh Hall visited in May to talk about his adventures and we had an Easter party.

As everyone will remember, Adrian Shafto’s organised approach to having fun resulted in FFSC winning the open section in 1991’s Felixstowe Carnival. The certificate and medallion are still in their place behind the bar.

Raft Races – Adrian is also involved in building a number of ‘one-design’ rafts for this year’s Felixstowe Raft races.

Wandering back in time through Jim Peck’s old Ferry newsletters, this month’s discovery is that in 1972 the club held a fashion show in aid of the RNLI.

The event was an ‘outstanding success, and almost brought the house down, or so our bomb hoaxer would have us believe’. In addition, the club also raised over £500by activities over the Spring Holiday weekend, including £54 by a sponsored row, in which only a handful of stalwarts participated.

The crew of the Lifeboat the Margaret Graham also had a whip-round for the club and presented us with an engraved trophy, to be competed for by Yachts.

To encourage people thinking about new boats to think Lark, Richard Woolf has supplied details of some boats for sale (space allowing).

Richard is really keen to get Larks to the Ferry and will be pleased to supply helpful hints about buying one!

Dinghy salors who like the idea of being rescued when they get into trouble will be glad to know that we now have 3 full qualified rescue specialists within the club. Adrian, Andrew (Bart) and Kevin have now obtained their RYA powerboat Scheme Level 4 certificates, which means that they all have passed as Rescue Coxswains, Level 3, plus and endorsement as Rescue Fleet organisers to become Level 4.

This recognises the ability and efficiency of the Ferry Rescue fleet, and also qualifies the trio to teach rescue techniques – which should be useful. 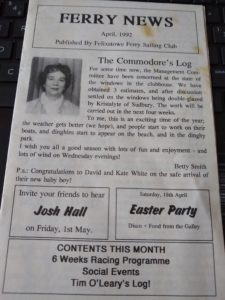