Colin Bentley was our Commodore

The purchase of the club freehold for £28,000 is progressing. It will be paid in part by a loan of £20,000 from a charitable trust, Godfrey Mills. The freehold includes the land upon which both the clubhouse and the public toilets are built and the embankment, between the sea and the car park, as far as Harbour Villas. The load will be repaid within 10 years a slightly more than it would have cost us in ground rent over that period. I wish to thank Guy Pearse and Norman Berry for their invaluable help, advice and assistance in the prolonged negotiations and in securing the loan.

In July the cub hosted the OK World Championships. The championships was a tremendous success due mainly to the efforts of Tim O’Leary. He led a small committee which organised the event, saw to the measuring of boats and sails and as Race Officer, set the courses and ran the racing. He seemed to have taken up residence in the club the week before as, night and day, he busied himself around the club. Many of the competitors arrived earlier than anticipated and this created problems outside the Race Officer’s usual domain. He had to deal with the complaints from residents about the use of bushes, which stemmed from the failure of the light bulbs in the public toilets!  Because of the large number camping at the Ferry, the gas for showers needed continual replacement and the septic tank needed to be pumped out. Our thanks are due to Suffolk Coastal who responded promptly to each request.

Deben Week followed soon after and for the racing at the Ferry, we have to thank Tim O’Leary for taking on the job of Race Officer and for setting the courses, shouldering the worries and running the races.

Ferry sailors acquitted themselves well at the Squib National Championships. Dave White and John Yealand were unlucky not to be placed higher than 6th overall.

On behalf of club members and visitors to the club, I wish to express thanks and appreciation to the Folley family for excellence of the food, their enthusiasm and cheerful willingness and the effort and hard work they have put into improving the facilities to the Galley.

I was deeply saddened to hear of the loss of Carl Giles, our President, a genius cartoonist and great personality.

For as long as I can remember Carl was associated with the River Deben in one way or another, messing about in boats or sailing his yacht.

My first recollections of him are of his large caravan, on the cliff top at Waldringfield behind the Maybush and his old battered Land Rover ‘LRT 146’, both of which featured in his drawings.

All through his life, he had people laughing at the antics of the Giles family, the Royals, politicians and life in general. At the end of each year, I looked forward to the Giles Annual. At a glance, you could recall the events and crises of the past year. A comical potted history, they still hold a great fascination as there are so many details we missed the first time.

He was a man for whom I had great respect. A very approachable man who, for reasons best known to himself, insisted always on calling me Bob. I never did have the heart to tell him that I disliked it intensely! It has been said and written that Carl was a very complex person; grumpy, impossible, funny, difficult, a good friend, cantankerous, a comic genius, a great host and raconteur and a great observer of the eccentric English way of life which featured in so many of his drawings.

Carl provided numerous Laying Up Supper menu covers, which are lasting reminders of his special talent recording events in the Club’s history. Many is the time I have visited him in his Ipswich studio to collect the original cartoon to take to the printers. Usually about two days before the event. As often as not he would keep me whilst he related some outlandish tale. Many of the faces that look out of the cartoons are very familiar to many people and quite recognisable. Any face that Carl found interesting would appear in his cartoons. One never knew when talking to him whether or not he was sizing you up for one of his drawings.

Many local people who knew him became the recipients of small cartoons to mark some personal occasion. I remember well at one Laying Up when I asked for his autograph, the only paper I had was a £5 note – he signed it “Giles – This is Mine. I treasure it still”.

Many will remember his support for the RNLI through the Christmas cards and Lifeboat Day at the club, even when he became confined to a wheelchair. For his work for the RNLI the Queen awarded him the OBE. Even when ill he never lost his sense of humour.

At this time we remember his family and friends. The Club will miss him but his legacy of cartoons will ensure that we never forget him.

May he rest in peace 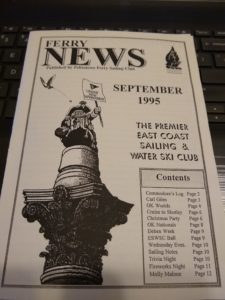