For National Service I had managed to gain a place in the Fleet Air Arm to be a pilot.  It started with six months training on the lower deck as a National Service Upper Yardman.  There were two training ships at that time, light fleet aircraft carriers HMS Ocean and HMS Theseus.  I was in a group with twelve others on the same course.  There were over a thousand seamen being trained on that cruise.  We sailed from Portland Bill to Gibraltar in the autumn of 1954.  I remember that we got caught in a fierce storm in the Bay of Biscay.  The wind reached Force 10 and the waves were breaking over the Flight Deck, a hundred foot above normal sea level.

We spent four months in Gibraltar and on our return called in at Tangier.  Oliver Woodroffe , a Cambridge rugby ‘Blue’, also on the course, invited me to join him on a visit to his aunt who lived on the coast there.  We did not return to the ship until late that evening.  We joined a queue of seamen returning to the ship and as we walked up the gang plank I realised that I had lost my Paybook, a Court Martial offence!  I managed to slip past the Petty Officer who was checking the names of all those returning and spent a very uncomfortable night in my hammock wondering what would happen to me.

The next morning I was still uncertain what to do and was well into morning duties when I was summoned by the Chief Petty Officer.  He ordered me to attend the Executive Commander’s daily briefing on the Quarterdeck at 10am.  I joined a queue of ratings who were being disciplined for various offences and quickly found myself standing, saluting the Executive Commander who was sitting at a table.  He looked up at me and said ‘Whittle –  You must be the luckiest man in the navy!’  He then passed me my Paybook which he had picked up on the Quay the night before.  That was it – I was marched off and there was no more reference to the occasion! 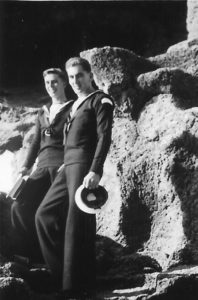 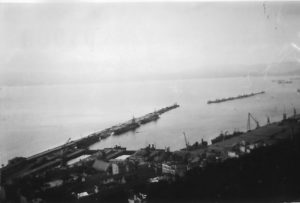