Popular News
You are at:Home»General»Parker’s Story

It was August 2011 and we were approaching the end of a Round Britain cruise in our Starlight 39, Betelgeuse. We had left Felixstowe Ferry in early May, turned right and kept going for the next three months. We had enjoyed a fantastic voyage – the weather had been kind to us and we had seen the most spectacular scenery and wildlife.

We were spending a night in Grimsby marina after a rather dreary 75 mile trip from Whitby. Even though Grimsby is not a picturesque marina, we were very grateful for its existence as it was allowing us to cover this stretch of coast without having to sail or anchor overnight. Also it had the cheapest beer in our entire trip!

Our next leg was to the pretty Norfolk harbour of Wells-next-the Sea, then Lowestoft, then home. We knew we could not get into Wells until about 9pm because of the depth, when it would be getting dark, but the harbour-master has told us that he would come out in the launch and lead us in. The day was a miserable one, and for the first time on the whole trip it rained for much of the day whilst we were at sea. There was very little wind so we motored in the greyness across the Wash, unable to see any land, with only an occasional puffin, seal or guillemot for company. As we approached the buoy marking the entrance to Wells harbour, a 25 knot wind sprang up out of nowhere. James radioed the harbour-master, who said he would come out for us in about 45 minutes, as there was still not enough water for us to get in. For the next half hour all hell seemed to break loose! The wind blew consistently 25-30 knots, there was a 2-3 knot tide carrying us away from the buoy, and the comparatively shallow sea was whipped up into a frenzy. Betelgeuse, normally a very stable boat, was behaving like a bucking bronco. Darkness was falling rapidly and the heavy rain continued while James tried to circle the buoy without becoming disoriented and heading towards the sandbanks. He asked me to keep pointing at the buoy, like you would do in a man overboard situation, which served the dual purpose of keeping me occupied and the boat in the right place. It was now pitch dark, but finally we saw the welcome lights of the harbour-master’s launch. Following him in through the intricate twists and turns of the entrance channel was like taking part in some sort of wild computer game. When we arrived in the harbour, as is often the case, all was calm and still, and the holidaymakers enjoying their evening strolls looked in amazement at our exhausted  dripping selves.

It was a salutary reminder of how fast conditions can change without warning – there had been no mention of strong winds in the forecast and we could only be relieved that we had not had any sails up at the time. It also seemed somewhat ironic that during a season when we had crossed the Irish Sea and the Pentland Firth without difficulty that our scariest moment should be so close to home. 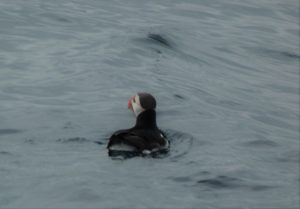