This is a tale about the first time I sailed my own boat from Felixstowe Ferry across the North Sea to Belgium.

I had crossed the North Sea only once before in the mid 80’s when I joined Fred Webb’s crew on board his Impala for a North Sea race to Ostend. My memory of that crossing was of Keith Twinn (navigator) down below with his charts and earphones trying to get a fix from the RDF; this was prior to Navtex and gps in small boats.  The other thing that struck me was the sheer quantity of duty free (van loads of it) that was loaded onto the racing boats at the North Sea YC before returning back across the North Sea, on that occasion into a strong north westerly resulting in a very long and wet crossing.  But I digress.

By 1992 I was the proud owner of a Westerly Merlin and having done my Yachtmaster Theory was keen to put it into practice with my first skippered crossing to Niewpoort. My intrepid and trusting crew were Keith Twinn, John Thirwell and Guy Pearse.  It was in the early days of Navtex and I had just a basic set which displayed only Lat and Long, so doing fixes and dead reckoning alongside seemed to be the sensible thing to do.  But as a further navigational aid, John T had brought along from BT Martlesham a prototype mobile gps receiver. This should keep us on track I thought.

So off we set very early on a nice sunny morning in June out of the Deben with a NE 3 increasing later to a 5. There seemed to be a lot to do before losing sight of land with fixes to do, spinnaker to hoist and breakfast to cook.  I remember being anxious about ensuring that I got a good fix before losing sight of land, and sure enough that anxiety had its consequences: seasickness.  It was the first and last time I have been actually sick and I put that down primarily to the anxiety of that first crossing. As it was, the navigation worked out well in that we found our destination.  Meanwhile John T had been unable to get a fix from the prototype gps which was all a bit of a mystery. Apart from that the rest of the crossing was straightforward and we arrived 13 hours later into Niewpoort. They were extending the sailing club marina, so we rafted against a beautiful boat from USA. We were made most welcome and were given a tour of this amazing trans-Atlantic yacht.

The next day there was time to explore Niewpoort before we set off back in the evening – we all had to get back for work.  I recall coffee in the square, before returning to the boat with our boxes of duty free.  A lazy afternoon was spent prior to the overnight return crossing.  At 22.00 hrs we were about to depart only to find that the navigation lights weren’t working.  Keith, the ever resourceful electronics engineer, soon made a hard wire fix which enabled us to depart.  Having cleared the harbour, we set sail in a beautiful evening: calm sea, light winds, moonlight and the twinkling lights on the shore and of the shipping and the illuminated Ostend ferry passing our heading out to sea.  It was a glorious evening as we peacefully sailed away from the Belgium coast and I was enjoying every moment of it, until it was pointed out to me that if we kept going at this speed we wouldn’t be back for a week!  So somewhat reluctantly the trusty Bukh was fired up which helped us on our way. It was a gentle calm crossing and John T was still trying to get a fix from the prototype gps.  He tried changing the batteries, several times (he had a bag full of them), but still no good.  Fortunately the little Navtex was doing its stuff and we found the Deben entrance and our Ferry mooring successfully after a memorable long weekend.

We later discovered that the gps satellites were not working that weekend! 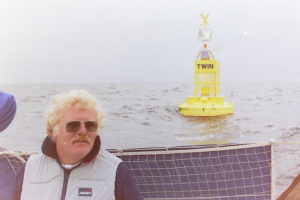 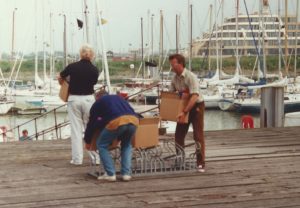