Having sailed from the Ferry in spring of 2014, by July 2016 we had made it down the Atlantic coast of the Iberian peninsula to the marina at Rota, a nice little town in the bay opposite Cadiz. For the first time we had decided to have Fae’s two grandchildren on board for a fortnight, so flew back to England to pick them up. A ten and a seven year old, they were obviously very excited at the prospect of finding out what granny did all summer instead of showering them with treats.

Well they did and they didn’t. They did in terms of it being a hot and foreign place, the latter giving us the challenge of finding more than one restaurant serving chicken nuggets and chips. They didn’t in terms of sailing. For the two weeks they were there it blew over 20 knots virtually all the time, always getting up further in the afternoon. Not the weather to take two novice youngsters out in. So they went to the beach – why, I never knew. I joined them for 5 minutes once and got sand blasted.

We had booked to leave the boat for August out of the water in a yard at Puerto Sherry, a place replete with engineers, sail makers etc. Excellent for the items that needed attention. But how to get there with the youngsters? I basically spent the first week comparing forecast to actuality and finding it was right. Wind, wind, and more wind. Until the end of the first week, when a ‘hole’ was forecast. Only 15 knots in the morning  – perfect.

So, on the appointed morning, I checked the weather forecast (again) and we set sail in 15 knots. Puerto Sherry is only about 6 nautical miles down the coast so, wind on the beam off the sea, and a flat sea – perfect. The kids were doing as they were told and enjoying something different.

After about half an hour, Fae got fidgety. She kept looking at the sky. I could not see anything – it was a hot day (again) and it was great to be sailing (again). Since we started sailing together, we have had the rule that if either of us are not happy and there is a choice of action, we defer to the cautious option. Up till then we had used this twice and turned back soon after leaving port. Since we were now over half way, in this instance this was not an option. Fae said “I want to reef”.  I looked at the sky, still couldn’t see anything, but deferred immediately – after all, she had lived 3 years in the Med on a 45‘ cat.

Ciconia is a Jeanneau Sun Odyssey 35, mast head rigged. The genoa is by far the bigger sail which we find has much more power, so we always reef it first. This is also much easier. There are 4 markers to indicate reefing points on the sail. “One spot?” I said – “No, the lot” was her response. Then “children below – now” which they dutifully did. So I wound it right in. A minute later the wind switched 180º to off the land (thankfully) and ramped up to 35 knots. The main was flogging a bit but with less than 20 minutes to run I deemed it worth leaving. Tough sails, Elstrom. We flew the last two miles – of course the boat motion was totally different. The kids in the fore cabin loved it, rolling and crashing from side to side. Fae (nothing to do with the wind) looked terrified – what was she going to tell their mother?

The entrance to Puerto Sherry is extremely sheltered, so no problems getting the sails down. I didn’t fancy going into a new (to us) marina in that wind, so we motored up and down for an hour. In neutral one minute doing 8 knots, engine flat out the next making one knot. And the maximum steady wind speed we saw was 44 knots. Mmmm.

At last it dropped to a manageable 30 knots, so in we went. Luckily they gave us a stern into the wind mooring to back into. What did the kids think? One loved it. The other said “I prefer Spain”. ??? They did enjoy a bit more of Spain at the excellent nearby Aqualand water park. Even I tolerated lying by the pools – without getting sand blasted.

What did Fae think? “How do I tell my daughter (an experienced sailor) I’ve just taken them out for their first sail in a force 9?” I can’t remember if that was before or after “Where’s the Bacardi?”… 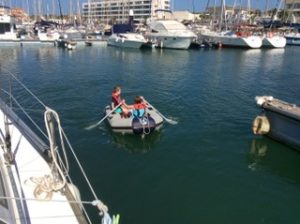