Popular News
You are at:Home»General»Story from Chris Barnard

Many of the “old” brigade will remember my father’s lovely old (Built in 1935) motor yacht Alvista and the many hours of enjoyment, some of it alcohol might have played a leading roll, and the many technicolour second breakfasts fed to the North Sea.    But the time for her to go finally arrived and she was sold to a gentleman by the name of Harold Bell, who lived by very high and traditional standards as was his methods of navigation.
Harold asked if I knew of anyone who would be prepared to skipper the boat to her new home which was to be in Ampuriabrava in southern Spain.   It will not surprise you to learn that I did know such a person, and so I set about preparing the boat for her epic trip and handing out the Queen’s Shilling to willing and capable crew members.
The nucleus of my crew consisted of my willing and capable wife Diana, and my engineering cousin Mike Seton, soon to be known as “chiefy“.   Harold asked along his long haired, back-packing nephew from South Africa and two delightful and completely inexperienced ,also back-packers, from Australia.   They both proved themselves decorative, fearless and quick learners.
We set off from the Ferry late April (I’m told by those in the know that bets were being taken as to how far we would get), and made it to Ramsgate for our first over-night stop.   From there we coast hopped down the French coast to the Seine
And this is where Harold produced his “peace de resistance” (sorry about the spelling),   a pre-war copy of French travelling companion by Michelin and proudly announced, ” Look, my Michelin guide shows just one lock between Rouen and Paris.    So we should make good progress from here. ”  Six locks later…….!!   When we moored up in Paris, adjacent to  Pont Alexander III, after being pooed on under a bridge by a b….y french pigeon, we stepped ashore with a shopping list, the top of which was an up to date map of the French canal system.
Locks closed at 1900hrs. till 0700 and we were always up and rearing to go when they started to function again.
The French canals were an absolute joy.   All those on the Canal du Central, in those days,  were manned by really helpful operators, often with their families, so it was cans of Watneys Red lable export, sweets, and packets of fags, left on the lock side all the way – depending on the family situation – and if we were having a problem passing a vessel, such as a small tanker,  we would cruise up to within hailing distance and, best school-boy(girl) french ask permission to over-take.   On passing we would lean across and a pack of six beers would be handed over.  We had no problems from there on.
The canal system took us up to over 1000 ft., through some of the most beautiful countryside and towns, giving us plenty of chances to sample the best local wines, and eventually, after many more adventures – for recounting on a different occasion – we arrived in the shiny, blue Mediterranean sea.
Because Harold was impatient to make it south, we found we had time on our hands, and so the obvious thing to do was to drop the hook just off the coast and relax.   Once deployed we could see the anchor chain descending 5 fathoms to the sandy sea bed and the anchor chain leading to the anchor itself some distance ahead.
And now we come to the point of the story.   This water looked too tempting for Chiefy and I,  ignoring the fact that at this time of year, mid May, much of that Chrystal clear water would be snow melt we leapt in without a care, under a warm Mediterranean sun, and immediately thought we would die, or at least loose our manhood, but the fact that we remained happily married speaks for itself, and says much for our respective, long suffering wives.
All is not always what it seems.
Chris Barnard. 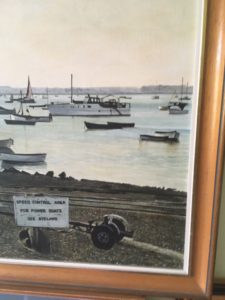