I started sailing at the age of eleven when our family moved from Somerset to Dover and I started secondary school.  The school had a sailing club and my Mum suggested I give it a go.  So, on a Wednesday evening, after school, in gym shorts, school shirt and jumper I got into an Enterprise for my first taste of sailing.
In 1976, our school entered a team into the National Schools Sailing Association Team Championships – my first taste of team racing.  One of the heats, possibly the first, was held at Felixstowe Ferry Sailing Club.  Long old trek in those days – pre M25, pre Orwell bridge.  I don’t know who we were racing against, but we won and went on to become National Champions.
Years passed, with not a thought about FFSC.  I sailed many different types of yachts and dinghies in many different countries.  In 1994, as a mature student at the University of Portsmouth, we won the Student Yachting Nationals.  In that crew was a certain John Scammell.  Part of our training was to enter a Sunsail regatta – the event was held using the Sunsail Fleet.  We won the Sunsail regatta and then the final and with it a holiday to a sunsail base in Turkey.  One of our crew sold his ticket to a certain David Scammell and there we sailed a Laser 2 together.  At that time, he was racing Darts with Dave Robertson and I was racing yachts in the Solent.
In 1997, Dave Scammell and I teamed up in a Laser 5000 and begun the long slow learning curve that befits a raftsman and a spinnaker trimmer!  Two years later we came to Felixstowe for a round of the Laser 5000 Quattro cup series.  When I walked into the clubhouse and saw the Giles cartoons on the walls, I was transported back 23 years to my first visit to the club!  The following year we returned and I won best improver (Helm)  I moved to Suffolk in 2003 and competed in the Laser 5000 event that year with Jim Baldwin crewing.  Thanks partly to Bart & co., for stopping Jim drinking too much and definitely thanks to Jim’s prowess as crew, spinnaker handler, tactician and navigator, we won the event.  I have been a member ever since. 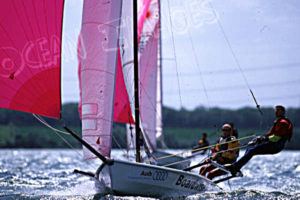