The finish of the 2015 Dart 18 Europeans in Grossetto, Italy only 2 weeks before the Nationals inevitably reduced the entry list, but the 37 boats who travelled to Felixstowe Ferry SC had a great Nationals both on the water and socially. 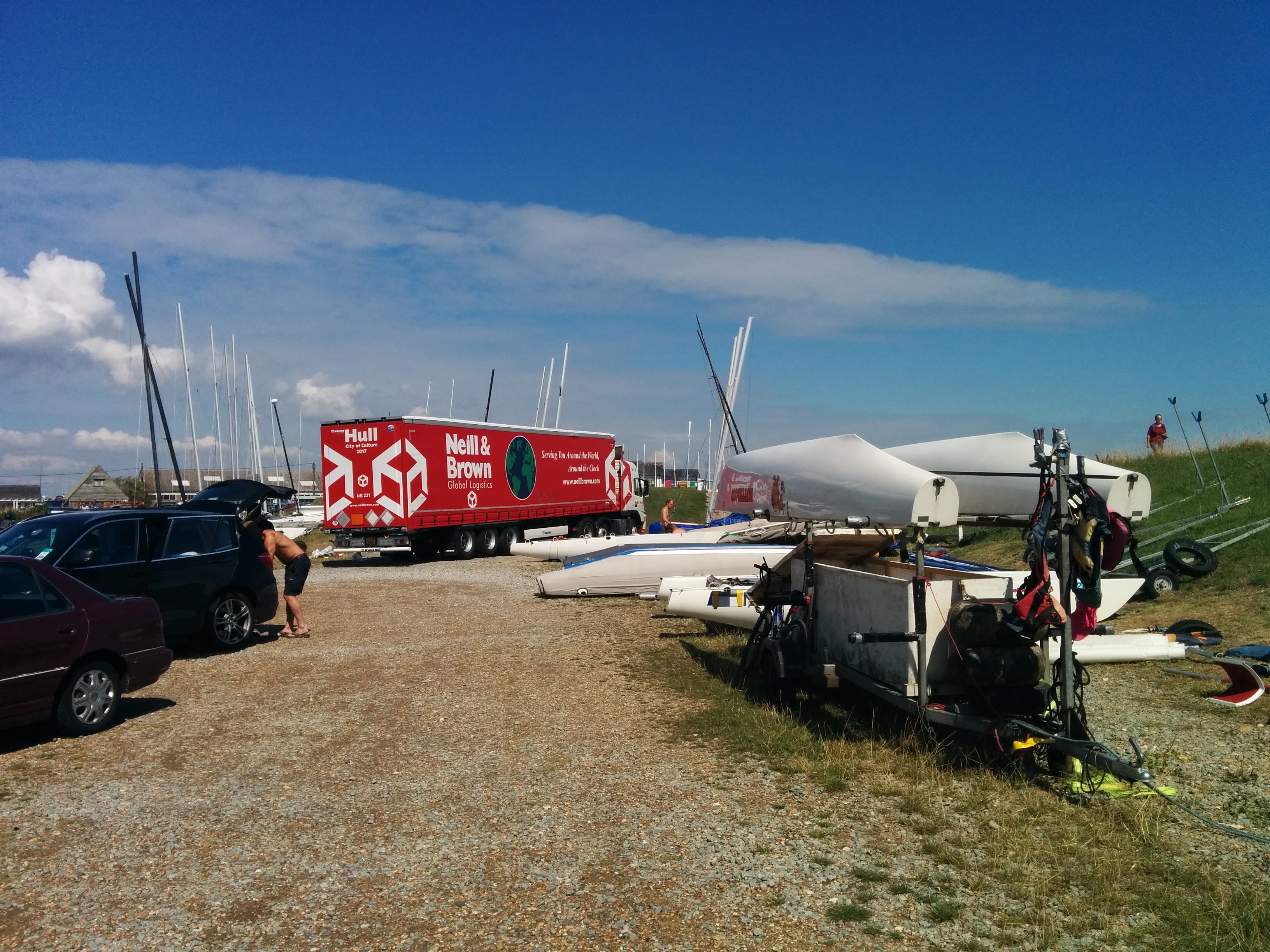 Competitors arrived on the Wednesday afternoon and Thursday morning for the usual round of boat rigging, scrutineering, registration and the chance to meet old friends over a beer.

The teams set off around midday on Thursday beating against the flood tide to sail out of the River Deben towards the race course approximately a mile southeast of the club. The weather was bright and sunny, with blue sky, a light force 2-3 southeasterly, and a short choppy sea. This proved to be the prevailing conditions for the event, and proved quite difficult to sail in, especially for the heavier teams.

Race one set the pattern for the weeks results with Dave & Louise Roberts (Stokes Bay SC) winning from David Lloyd & Amy Knott (SBSC), and Paul Wakelin (Mumbles YC but brought up as a Felixstowe sailor) sailing single handed in third. Conditions were similar in race two and the same 1-2-3 took the honours! The fleet sailed back home up the river and enjoyed a hot buffet and live band to unwind and prepare for the next day.

Friday and race three took place in slightly more wind and with the direction more on-shore. The fleet got away despite an individual recall and it seemed that the status quo had been maintained with the same first three, however the results later showed that Lloyd & Knott along with four other had been OCS, which allowed James & Tom King aged 17 and 14 and sailing their first Dart event to take third behind the Roberts’ and Paul Wakelin. Race four and Wakelin got a clean start and led the fleet throughout to win from the Roberts’ with Matt Ambrose & Dan Ryder-Davies (Felixstowe Ferry SC) taking third ahead of Lloyd & Knott. Dave & Louise now had a 100% record of wins to lead from Paul Wakelin in second – an impressive result sailing single handed! That night saw the UKIDA Games Night including Golf, Walking The Plank, Head Skittles, Limbo, Dart Darts, The Coin Clench, Rowing, and the grand finale – The Tissue Box (you had to be there to appreciate it!). The event raised funds for UKIDA and the prizes included places on the Windsport sponsored training weekend in October. 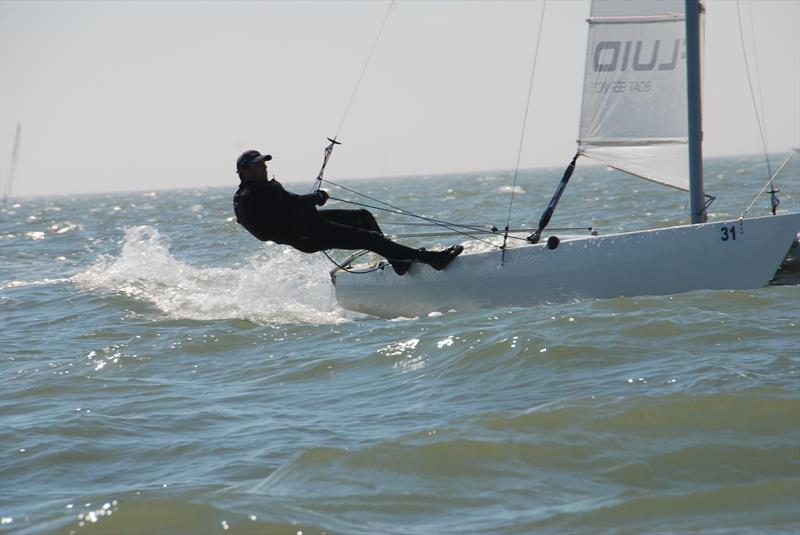 Saturday dawned to more of the same – it appeared that the Dart fleet had found their own sunny corner of the UK despite the gales and rain afflicting the rest of the country! Races five and six followed the by now familiar pattern with the Roberts’ winning both and with Lloyd & Knott and Wakelin both recording a second and a third. This meant the podium was now settled but what would the final order be? The final day would decide! Saturday night entertainment was a seventies themed fancy dress party with more live music and another excellent buffet.

Sunday morning and the weather finally changed, but not for the better! At 9am the wind was blowing 20 knots gusting 25 knots at the entrance to the river with 1.5m of breaking swell over the bar. The Race officer sensibly postponed for an hour. By 10am the wind reading on the shore was a steady 26 knots with bigger gusts and even more surf. With no prospect of an improvement in time the inevitable decision was taken to abandon for the day leaving the overnight results as the final ones. Congratulations to Dave & Louise Roberts on yet another National Title, to Paul Wakelin on an impressive second place after a long absence from the fleet, and to David Lloyd & Amy Knott on another podium finish.

UKIDA and the whole fleet would like to thank everyone at Felixstowe for putting on a great event, the Race Officer and his team for setting good courses and getting the fleet away promptly, and Brian Phipps of Windsport for making the long journey up from Falmouth to furnish support for the event. 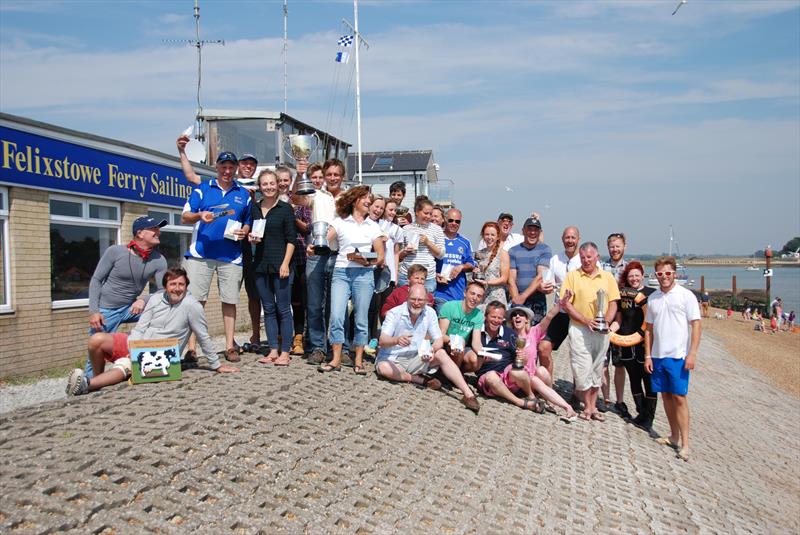 Next year sees the fortieth anniversary Dart 18 Nationals at Stokes Bay SC in late May and we hope to make it a very special event – if you have ever sailed a Dart please try to make this occasion! Look out for details in the yachting press or on www.dart18.com.

Overall Results:
If you finished in the top ten at the Dart 18 nationals then enter your Gear Guide information here