A cloudy start to Sunday the 18th saw the crews gather for another legendary Tim O’leary briefing . The course was set to run from the club line across the bar and round a few cans out to sea. With the now immortal words of “just follow me” Tim closed the briefing and the crews got ready to launch.

A nice breeze of around 12 knots greeted the eclectic mix of starters for a downwind start, At the Gun the lasers, mirror, laser 2000’s gathered into the tidal back eddy on the Bawdsey side with the Dart 16s. The asymmetric and multihulls forced into the tide to carry take their preferred line for speed, but would they cross in front?? As the fleet came to the cut it seemed that everyone had taken Tim O’Leary’ words at face value as they followed him through the first cut, closely followed by Max Evans, Andrew Hines, Ian Jones and Ed Swain, the dart 16’s of Paul Williams & Holly Taylor and also in a Dart 16 Sam and Josh Seddon went round as a group. Matt Read ably crewed for by the two youngest competitors in the fleet Fynnley Read & Liam Fee got stuck in cut fighting tide due to a delay hoisting the kite. 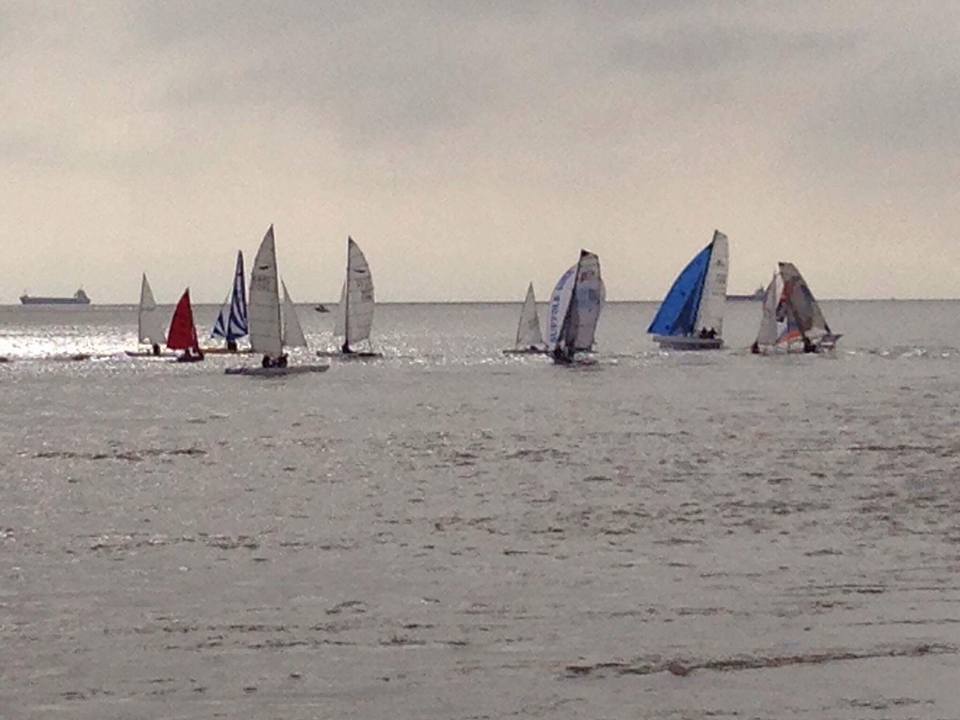 In the melee of the tidal flow across the cut the Nacra Infusion F18 helmed by Sam Rowell flew through to stretch their legs out to sea (well heading for Orford), the B14 of Roger Lewis & Chris Coe found a line over the bar and turned on the afterburners in pursuit of The Nacra. Bringing up the rear quite nicely was the B14 ‘Suffolk Sails’ of Simon Scammell & Jez Taylor who decided that it would be nice to see the startand what the fleet looked like from the cheap seats. After a wistful glance to the mirror team ‘Noah’s Ark’ Matt Read, Fynnley & Liam (halcyon days!) the ‘Suffolk Sails’ B14 found themselves threading themselves through the laser fleet as they went over the cut (there was a gap – honest!)

Tim “just follow me” O’Leary obviously felt a bit guilty about everyone following him, so, he kindly shouted some instructions for the best route to ‘Highcliff’ which was the first mark of the course. Duly noted the asymmetrics and multihull fleet headed off to Orford, then to Felixstowe then Orford then Felixstowe (trust us it does work).

The lasers ran down to outer, keeping the Dart 16s behind them, the laser 2000 of Nick Gold & Robert Morgan were having a bit of a battle with Matt and team in the mirror. A bit of indecision on this leg saw the B14 of Lewis / Coe take the kite down early, as they struggled to decipher Tim “just follow me” instructions this turned out to be a bit premature and they gave away their position like all good sailors as soon as they realised that the decisive indecision was wrong they decided to hoist again, decisions, decisions, decisions, unfortunately their vessel decided for them that the kite would stay in the bag for a little while at least. Harumpf!

Sam Rowell in the Nacra turned ‘Highcliff’ first followed eventually by Simon Scammell and Jez Taylor in the B14, Roger Lewis & Chris Coe followed in third after finally saying the magic release the kite words, with the Dart 18 of Andy Robinson and Lucy Ellery following close behind. First laser to round was Tim “are you still following me?” O’Leary, would any of the slow handicap dare to overtake Tim? If they did how would they know where to go? Would they disappear in a torrent of Tim-isms? Thankfully the unspoken rule of do not upset the Race Officer seemed to be well and truly in force. A quick swim at Highcliff saw young Ed Swain lose touch with the laser fleet as he searched for turtles (or maybe he was concerned about his dad trying to windsurf?)

The leg to outer proved to be just the ticket if you had around 25-30+ sqm of asymmetric spinnaker to fly which the Nacra and the B14’s had. Sam Rowell lit the afterburners and the Nacra disappeared towards ‘outer’, Simon and Jez in ‘Suffolk Sails’ B14 worked hard to stay in touch but it was a bit like turning up to a knife fight with Arnie Schwarzenegger. The Nacra disappeared into the distance. Roger and Chris turned the mark at ‘Highcliff’ and they too set off in hot pursuit of the two dots on the horizon, closely followed by the dart 18 of Andy & Lucy. Would Roger & Chris uphold the honour of the monohull world and keep the Rafts back in 4th???

By the time they got to ‘outer’ the positions were still the same with the Nacra somewhere in the distance, ‘Suffolk Sails’ B14 nearly on the horizon, then the B14 of Roger & Chris fending off the Dart 18 of Andy and Lucy. A beat to inner saw the Dart 18 of Andy & Lucy get past Roger & Chris (hang your monohull heads in shame). Now Andy & Lucy had found the go button could they catch Simon & Jez in the B14? Err no….. Simon & Jez happily cruising into the River to Take 2nd place on the water with Sam Rowell & Nick Swain in the Nacra finishing first by 8 minutes. Coming in 16 seconds behind in third were Andy & Lucy 3rd, with Roger & Chris in the second B14 two minutes behind. A ten minute wait saw the the laser of wait for it…..yes you guessed it never upset the race officer! Tim “just follow me” O’Leary, with Max “grand master” Evans 11 seconds behind.
A special mention for Mark ‘swainy’ Swain for attempting to windsurf the course on a day with only 10knots– not a windsurfy sort of day!

Also huge thanks to the ladies and helpers in the ‘race office’ we really can’t do this without you! Josh for the results service, Alasdair for organising rescue crew and boats and last but not least Tim “just follow me” O’Leary for letting a few of us past (and for setting the course amongst other stuff he does!).

Thanks too to Suffolk Sails for donating prizes. Barts Bash September 17th 2017 put it in your diary and lets have another great day on the water, racers and cruisers, yoof and grand masters, fancy pants and marvellous mirrors the more the merrier. After a quick intake of the local thinking water the calculations gave the results as:

Finally, as a club over the last 3 years we have raised well over £1200 towards the Andrew Simpson Sailing Foundation, how easy is that as a charity? Go sailing stick a fiver in the pot – let’s keep doing it!