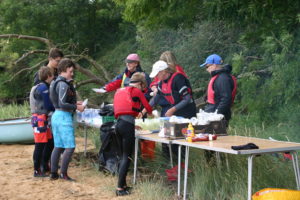 On the 3rd September a flotilla of boats left the Ferry heading for the Rocks. The advance party comprised Paul Williams in Freya carrying the food and Karl Wilkinson in Boy Dylan with the BBQs, tables etc. The main fleet of Fevas, Laser 2000s, the Sea Cadet’s Quest, a Dart 16 and a Wayfarer followed on behind with the safety boats. As usual on arrival food was the first concern, then splashing in the mud and playing in the water. Many students tried different boats, including Sam’s F18 Nacra Infusion which joined us. Andy and Gail Marshall and daughter also sailed up and came ashore to enjoy the BBQ.

True to form the sea breeze kicked in strongly on the nose for our return so the less experienced Feva sailors were towed home while one Feva sailed as far as south of the Ramsholt moorings before they too were picked up. All were safely home before the forecasted strong winds and rain arrived – just!