I started sailing in one of dad’s old dinghies, we had a broomstick mast and a piece of old canvas for a sail, I then started crewing in a national 12 for a man called Percy Hatfield, he was the wartime pilot who first spotted the Tirpitz in the western approaches before she was sunk by the Royal Navy.
Ben Cooper was another pilot I crewed for his boat was F666
My first go at helming was I think in the Arthur Newson cup. Brother David was crewing for me. It was a grey day with an Easterly wind, of course we had no P.B’s or indeed waterproofs, only fisherman’s smocks. Dad pushed us off from the beach saying “if you don’t come last I’ll give you half a crown each” there was only 4 boats out that afternoon.
Peter Tye in a N 12, Harry Searle in F484 which was one of the Olympic boats and one other .
We were lying last until Harry capsized and retired. This made us 3rd so no longer last ,what a result, I think Peter Tye won the race.
Only thing was we never got our Half Crowns!
National 12 Dinghy 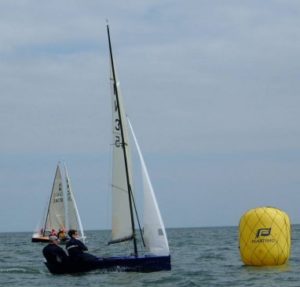