FFSC held its second ever catamaran open last weekend hosting a wide variety of catamarans. The event included the Dart 16 National Championships and was a part of the Formula 18, Shearwater and Catapult Traveler Series.

Last year 15 boats were sat atop the sea wall but this year 30 boats arrived and were in various stages of rigging on the Saturday morning. With record breaking temperatures just days before the rain arrived and coats and hoods were out. Whilst the fleet rigged the marks were prepared and the launching mats rolled out down the beach. 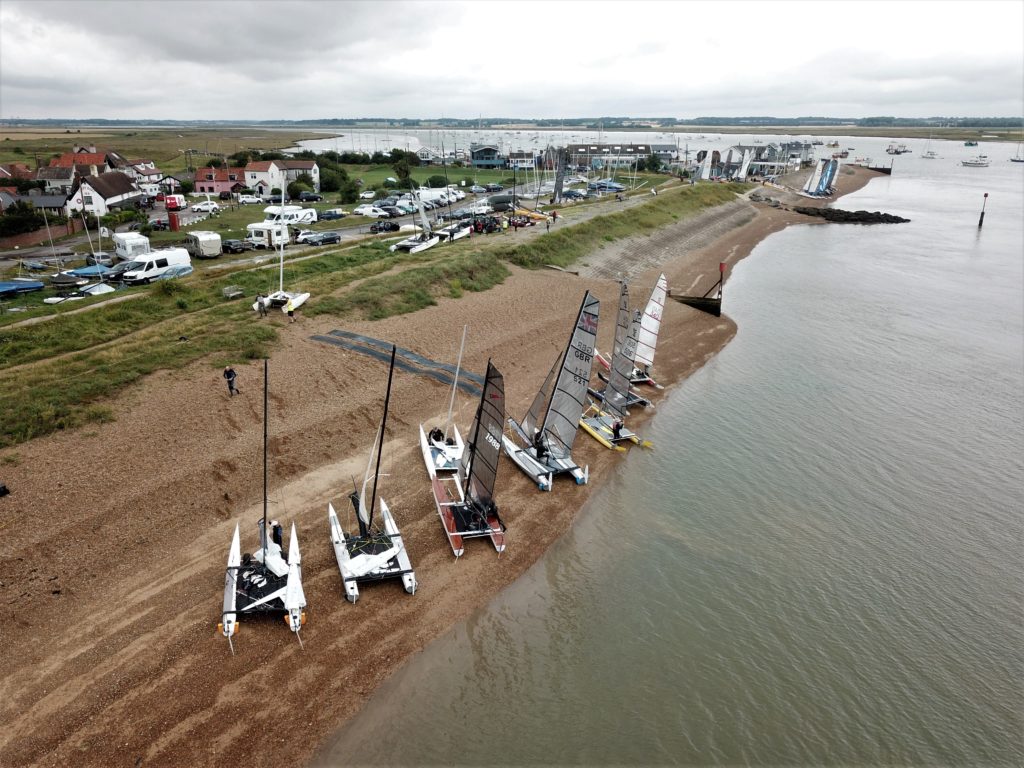 The briefing was moved indoors and the course explained with competitors double and triple checking how the lap system worked. Outer and Inner loop with reaches from one to the other were needed in order to keep the slow and fast handicap fleets away from one another and cater for the variety of boats in attendance.

Race 1 was delayed due to an issue with the mark boats and bit of wind swing. Eventually the two fleets set off and found there way around the course. The windward marks were set up with about 600m distance which allowed for 3/4 laps which resulted in some tight mark roundings and boat on boat action. Grant Piggott managed to catch his boards on the windward mark resulting in the first capsize of the day. Notable achievement to Mylo Burrell, age 7, who took 3rd Dart 16 in strong winds. 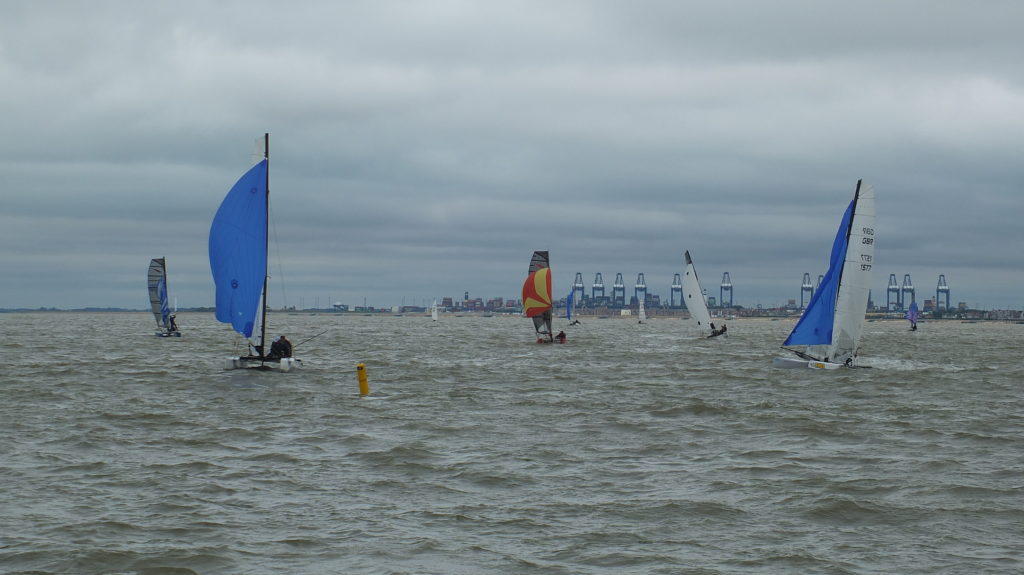 Race 2 saw port hand fliers from the Formula 18s who had to duck the leading F18s and weave through the entourage of Shearwaters just behind. With the windward mark to the right and a starboard course bias off the line the fleet tacked early heading towards the mouth of the river before banging the corner and heading for the windward. On the downwind Sam Rowell and Matt Langley capsized their F18 infront of Ed Swain and Zac Monk who unfortunately caught the top batten with their daggerboard ripping Sam and Matts sail. Capsize recovered they ploughed on to finish the race and stayed out for race 3.

Race 3 had to be the windiest race of the weekend. The capsizes rolled in with thrills and spills across the course with Shearwaters, Hurricaines and F18s showing the underside of their hulls. A massive spill from Ed and Zac resulted in a spinnaker up pitchpole. Luckily nothing broken on their Hobie Tiger that cost only £1000

Racers returned to shore after a long afternoon afloat but some great high powered sailing. Boats packed away and tied down for the wind overnight, the racers retired to the bar for drinks. Steak and Ale pie followed by Apple Crumble and custard was the evening meal which was served to over 80 people. Following this was a boaty quiz which was entered by 7 teams and was won by the Shearwaters who had no problem at all spending the £40 bar tab prize.

Sunday started with some rain but quickly turned slightly brighter. It appeared to be calm in the river but the breeze was lurking out at sea. Race starts were quicker off the bat and we got straight into the racing.

In Race 4 and 5 Andy Robinson and Isobel Cricton-Smith battled against New Zealander Mark Patterson (clearly traveled the furthest to attend if the NZL on the sail is genuine) trading first and second place. Simon Rowell in the only Sprint 15 at the event scooped up 3rd place in races 5 and 6. The remaining boats in the slow handicap traded places in all the races. Great to see the catapults and the dart 16s really mixing it up throughout the day. 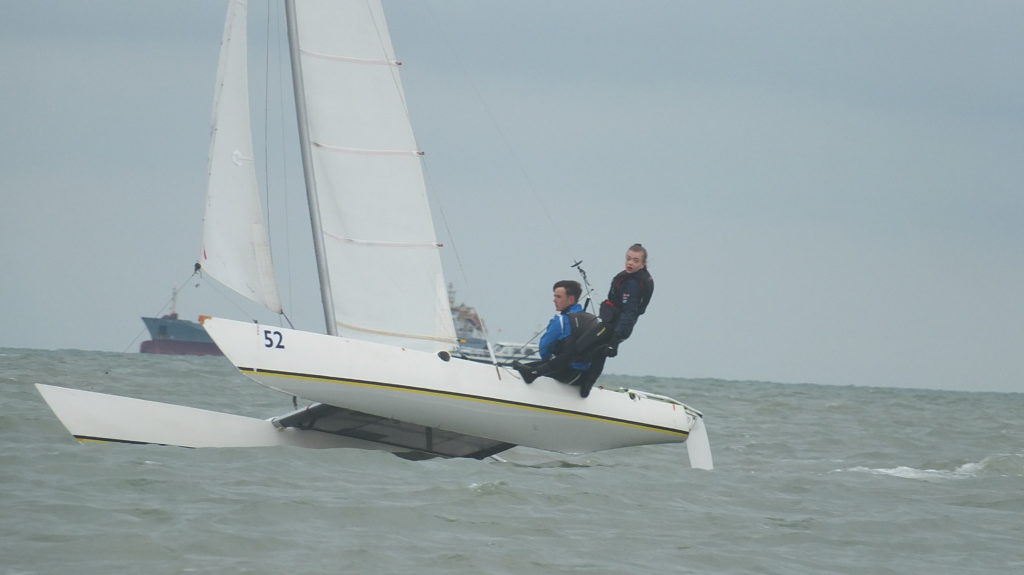 The launching team were on hand in their yellow high vis to help tired racers pull their boats up the beach. The dinghy park was full of people packing down their boats and the rain managed to hold off as well. A 4PM prizegiving gave everyone enough time to pack down before meeting inside the club. This years prizes were hats and coffee mugs supplied by club sponsor Billie Box along with custom laser etched medals for the winners of each handicap and class.

As ever a massive thankyou to all the volunteers that made this event possible and a special thanks to all those who loaned their yachts, displacement boats, ribs and drones.

Unfortunately there were no entries for the UKCRA Junior Cat Championships this year. The Nick Dewhurst Trophy will be retained for next years event.